How an Air Force aerospace engineer built an award-winning business

As an aerospace engineer in the Australian Air Force, Adam Frizell wanted to grow his understanding of wider industries and bring a different perspective to his role as an Airworthiness and Engineering Manager.
AGSM 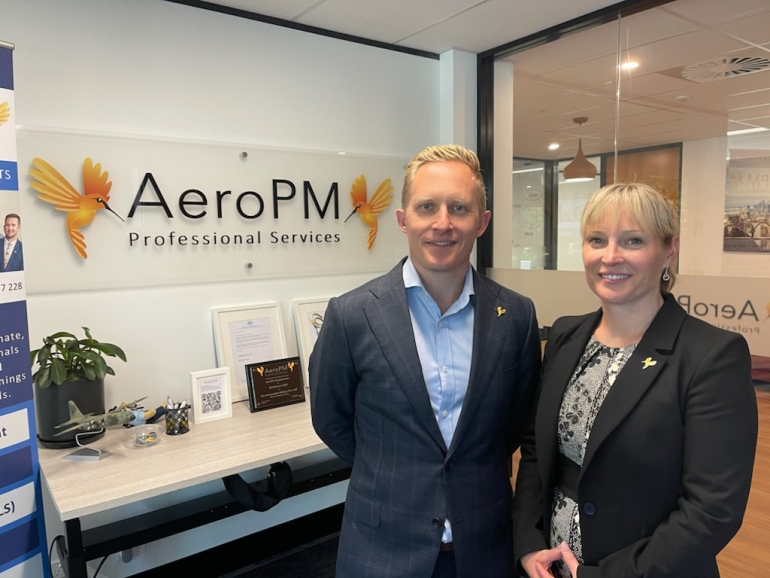 “I wanted to broaden my leadership abilities and learn different approaches that I could use in my military career,” Frizell says. “I wanted to do a program with civilians so I could learn from people with different experiences to what I had throughout my career.”

Having already completed two degrees from UNSW, a Bachelor of Aeronautical Engineering (2001) and a Masters in Aerospace Engineering (2004), Frizell was familiar with the university’s high quality education, and in 2015 applied for an Executive MBA at the AGSM @ UNSW Business School.

AGSM’s MBA (Executive) is a part-time national program designed for ambitious managers and professionals keen to accelerate their career.

AGSM also has a strong connection to the military and offers full and partial MBA scholarships to eligible candidates and partners with Wandering Warriors to provide additional scholarship opportunities for serving military personnel and veterans.

When Frizell started the program, he was hoping to further his career in the military. Little did he know that the program would provide additional benefits when he transitioned out of the military and into civilian life – building a new enterprise and growing it into an award-winning business with his wife Emily.

By veterans, for veterans

Frizell’s wife also served in the Australian Air Force, but with a growing family, she decided to leave and start her own consultancy, AeroPM in 2014. After winning a significant tender with the Australian Defence Force in 2018, Frizell followed suit.

“Emily and I put the tender response together and we won. The minute we found out, I put in for a discharge from the military, and we started to grow AeroPM into what it is today,” he says. AeroPM is an award-winning professional consulting firm that provides professional services across the defence industry - providing services and support in acquiring complex systems.

“Some of those systems range from the Joint Strike Fighter and the future submarine program, all the way through to small things like night vision goggles and ammunition. We primarily hire veterans, who understand Defence’s systems and capability needs, and who can go into an acquisition program within Defence as a strategic leader and support its direction.”

To date AeroPM has employed 63 people – 80% of these military veterans and 60% transitioning directly from the military – and boasts a number of prestigious awards. In 2019, AeroPM was awarded the National Professional Services Business of the Year and in 2020 it received the Most Outstanding Veteran Employer of the Year Award, presented by Prime Minister Scott Morrison. Most recently they were recognised in The Australian for their work in veteran employment, and Emily was awarded the 2020 Female Defence Leader of the year.

Frizell knows first-hand how challenging transitioning to civilian life can be. From the uncertainty of the future and family stresses, to translating military skills into business value and trying to find the right role with the right company. He has worked hard to create a culture and environment that supports this process.

“We've put in a number of protocols that allow the transition process for veterans to be smooth, easy and transparent. So, they can move into a company that understands the issues they face as they adjusted from military to civilian life. We ensure that our policies and processes are consistent with the individual's transition giving them a soft landing,” says Frizell.

AeroPM offers consulting masterclasses, and guidance and training programs that focus on professional growth and help individuals become a more well-rounded consultant in the workplace. “We also help them understand that what made them successful in the military may not necessarily be the same things that makes them successful in civilian life.”

Although Frizell originally enrolled in the EMBA to bring an outside perspective into the military, the program provided him with the tools to create the right culture at AeroPM.

“You don’t learn how to recruit people and establish cultural programs in the military. They’re already established for you. Whereas using frameworks and methodologies from the AGSM MBA, we were able to establish a people and culture framework that took the best parts from the military and removed all the bits that didn't fit within a small business in a civilian enterprise.”

The skills he gained from the EMBA have provided Frizell with the confidence and knowledge to run a successful business – something he had no experience with or exposure to before.

“Using the right language, frameworks and references, rather than trying to make it all up on your own without any experience certainly made the process a lot more efficient.”

To develop the company’s highly praised people and culture framework, Frizell was able to apply the empathy mapping structure he learned in his EMBA.

“We developed an empathy map that looked at three desired values or behaviours we wanted to promote in our people. We structured these around what our team says, thinks, feels and does. We then implemented initiatives that support the values and behaviours to make sure that our people have the right tools and support in place to achieve those outcomes.”

Frizell has also extracted every framework and tool from the program and put it into a handbook he can easily access – having a myriad of leadership tools at his fingertips.

One of the biggest benefits of the AGSM MBA for Frizell was his cohort.

“I learned so much from other people. Adele Schonhardt, the co-director of the Melbourne Digital Concert Hall (MDCH) was one of them. We had absolutely nothing in common – I was an aerospace engineer in the Air Force, and she is involved in music and the arts industry. Yet I learned the most from her because she had such a different way of thinking. And that's what I was looking for, that challenge and contrast to help me grow as individual,” he says.

Developing lasting relationships and a strong network has also been invaluable for Frizell.

“The EMBA has been the most rewarding degree that I’ve done, because of the breadth of networks I’ve created. We established a WhatsApp group on day one and it’s still going. I love hearing about people leveraging their skills for promotions or new opportunities. I’m still leveraging these networks and learning from the individuals today.”

Supporting the growth of future leaders

From a supportive administration team and engaging course content, to building lasting networks and learning vital leadership skills and tools – Frizell highly recommends the AGSM MBA (Executive) program to other business leaders who are either running their own enterprise or are aspiring to be in the C-suite.

“The policies, frameworks and models you learn, and the guidance you receive from the lectures and other members of the cohort allow you to grow as an individual and a professional.