UNSW Sydney has awarded honorary doctorates to Joanna Capon and Richard Alcock, in recognition of their distinguished careers and eminent service in their respective industries and the community.
Louise Templeton | UNSW Newsroom 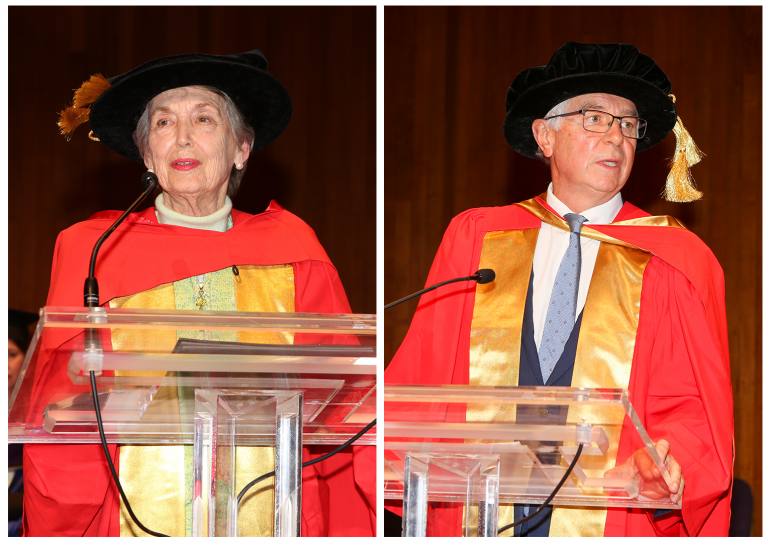 Mrs Capon is a highly regarded art historian, industrial archaeologist, curator, writer and lecturer, with a distinguished four-decade association with the arts. She has worked as Westmead Children’s Hospital’s honorary art curator since 1995, collating a vibrant collection of over 2000 paintings, sculptures, photographs and prints by renowned Australian artists, to lift the spirits of sick children and their families. She has also written books, published articles and lectured on Australian, European and Chinese art, industrial archaeology, and art as part of a healing environment.

An advocate for health, Mrs Capon has served on the board of The George Institute for Global Health – a strategic medical research partner of UNSW – since 2007. She also generously contributes her time and leadership to the UNSW-led The Big Anxiety Festival.

When presented with her degree at the UNSW Arts, Design & Architecture graduation ceremony, Mrs Capon shared some of the secrets to her success with the graduating students. She spoke about the need to remain flexible throughout life, to retrain if and when necessary, and to say ‘yes’ when the right opportunities arise.

“Be motivated, resilient and passionate about what you do, create your own opportunities, take no one and nothing for granted, never stop learning and remember that your career will be what you make it,” she said.

“Face disappointments and setbacks with courage and learn from them. Stand up for your beliefs but be prepared to listen to people whose views are different to yours. Be generous to people, including those who aren’t as fortunate as yourself. Be kind to yourself.”

Mr Alcock was admitted to UNSW’s highest honour for his exceptional career as a lawyer, investment banker and passionate public health advocate. He graduated from UNSW with a Bachelor of Commerce and Laws in 1981 and has held several corporate and health leadership roles over the past 20 years. A staunch believer in the power of cross-sector collaboration, he has also consistently volunteered his time in the education and arts sectors.

Mr Alcock is currently the Chairman of the Western Sydney Local Health District Board, a long-standing director of the UNSW Foundation Board and also a member of the University’s Gift Acceptance Committee. A champion for the importance of research in developing new treatments and universally accessible and affordable health care, he has generously supported several medical research initiatives at UNSW.

Mr Alcock offered advice to UNSW Business’s graduating class, encouraging them to adopt a ‘challenger’ mindset and to ‘lean in’ when faced with unnerving situations as they pursue their careers.

“Keeping the challenger mindset and holding your nerve will set you up for interesting and rewarding careers,” Mr Alcock said.

“Also, cultivating your passions really sets you up for a fascinating life. Keeping at least one thing you’re passionate about in addition to your family is vital to career success, relationships and physical and mental well-being.”

Mr Alcock said he was “incredibly humbled” to be appointed doctor of the University.