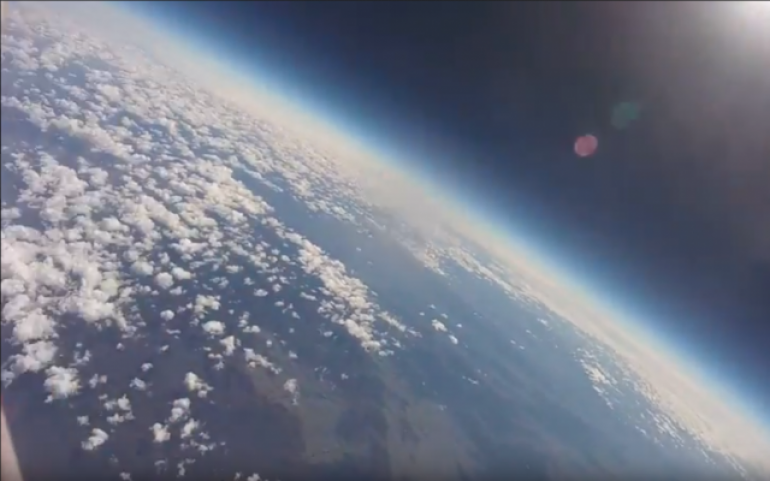 Imagine flying through the thin air of the stratosphere at an altitude of 23km – that’s over double the cruising height of a passenger jet!

This is exactly what BLUEsat – the student-led Space Engineering Team – recently set out to accomplish. We’d spent months developing a sophisticated payload and were at last ready to launch our balloon and use the payload to detect environmental conditions during the flight. 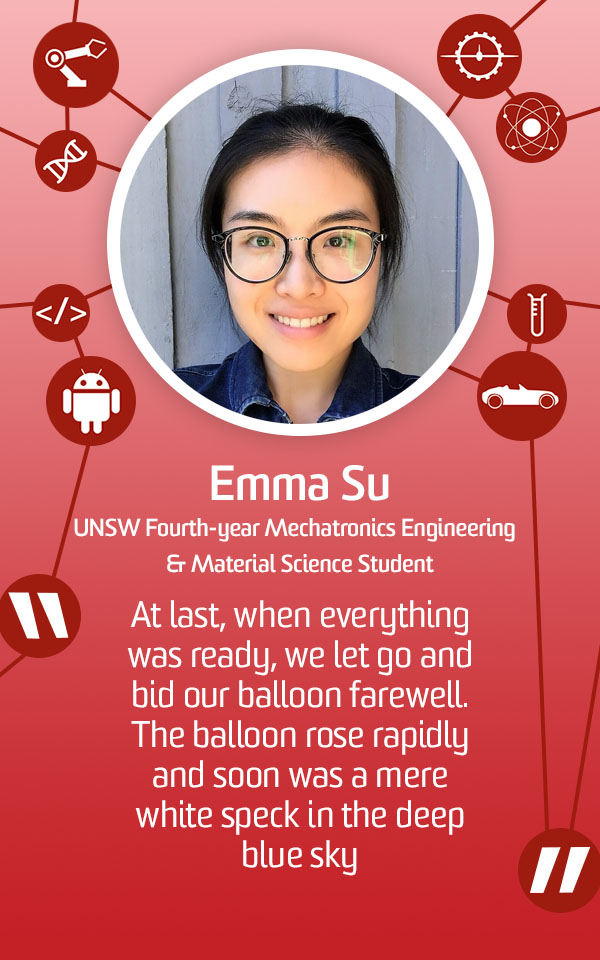 Our launch site was Muswellbrook, about 250km north-west of Sydney, and at the beginning of March 2018, in two cars jam-packed with equipment, gear and a fair amount of excitement, we began our two-night expedition.

We woke up bright and early at 6:30am on the morning of the launch. “This is it,” we thought, “the day all our hard work is going to be put to the test.” Benjamin La, our Payload Specialist, and Dr Elias Aboutanios, our Supervisor, conducted a series of simulations with updated weather inputs to verify the balloon’s predicted trajectory and with those important calculations done, we travelled to the nearby launch site.

As a member of the inflation group and the Parachute Rigger, my job was to help Elias and Jeffrey Wu, the Separation Mechanism and Rigging Specialist, to inflate the balloon while the rest of the team began final preparations of the payload. Meanwhile, our official Photographer, and most experienced BLUEsat member, Taofiq Huq, documented our efforts and helped us stay on schedule. By the time it was fully inflated the balloon needed three people to keep it steady, even in a gentle breeze. At last, when everything was ready, we let go and bid our balloon farewell. The balloon rose rapidly and soon was a mere white speck in the deep blue sky.

Then, the chase was on! We raced towards the predicted landing site. I had my eyes glued to the screen as I watched the received data packets showing altitudes of 10km… 15km… 20km… However, there was an unexpected development: the balloon ruptured after 23.6km (10km lower than planned) so we changed our destination and pursued our falling payload. It fell at a steady rate of nine metres per second (thanks to the parachute) and the last GPS reading indicated that it had landed in Barrington Tops National Park.

The terrain became rougher and rougher and within 5km of our payload the dirt road became too obstructed by saplings and shrubberies so we attempted to forge a path on foot. But unfortunately, by then it was getting dark, so we retreated, regrouped and made plans to return the next day to retrieve our precious payload.

The recovery mission was led by our Team Leader, Adithya Rajendran, and Anna Chan our Telecommunications and Tracking Specialist, who left early next morning with Elias, while the rest of us stayed behind to pack. While in the national park, the recovery team were fortunate to bump into locals Lionel Waker and his son who volunteered to take our recovery team to within 3km of the payload in their powerful Range Rover 4WD. However, by the time they got to a near vertical incline, which was impossible for the vehicle to traverse, a storm was almost overhead and the recovery team was beaten back a second time. Disappointed that they couldn’t get the payload but encouraged by the fact there was definitely a path to it, our recovery team said farewell to Lionel and the forest and joined up with the rest of the team to head home.

Two weeks later, we drove back to the national park and successfully retrieved our payload, although not until we had done some serious off-roading in Lionel’s 4WD (who had volunteered to help us a second time) and a difficult hike. Since recovery, our pictures have inspired thousands of comments and likes on social media and we have been diligently analysing the data from our payload sensors.