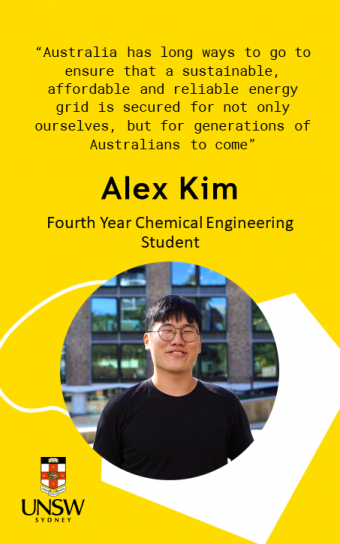 As a UNSW Engineering student, my interest in sustainability and Australia’s energy transition was sparked by courses I did which placed focus on the implications of engineering processes on the environment. Courses such as CEIC3005 – Process Plant Design and CEIC4001 – Design Project, required students to work together to design processes based on real-life cases.

Through these courses I got hooked on researching energy sustainability, where I researched the adoption of sustainability processes and practices, such as the production of bioplastics to reduce the impact of petrochemical based polymers on the environment, and the design of waste treatment plants and the production of bio-gas. Having understood the impact of processes on sustainability and Australia’s energy structure, I discovered a concept called ‘Energy Transition’.

Energy transition refers to the process of transforming the global energy sector from a petroleum-based systems of energy production and consumption, to developing a production, storage and distribution system that utilises greener sources of energy to help minimise the impact of human activity on the environment. Increasing awareness of the impact of fossil fuels on the environment is being prompted by signs of climate change such as the extreme droughts experienced in Australia.

Whilst many countries are investing into the decarbonisation of their energy supply and distribution with haste, Australia is not quite on the same level as the world’s leaders in energy transition. The World Economic Forum publishes reports on energy transition index of different nations across the globe, which benchmarks countries on the performance of their energy system. According to the report, Australia ranks 36th of the 115 reported nations around the world – disappointingly, this equates to Australia being placed dead last of all reported advanced economies.

It’s clear that Australia has long ways to go to ensure that a sustainable, affordable and reliable energy grid is secured for not only ourselves, but for generations of Australians to come. One of the best ways to help the energy transition process is to get involved.

As a UNSW student, there are many pathways in which you can get involved and spread awareness on the issue of energy transition. You can join a Vertically Integrated Projects concerned with sustainability and energy, such as Composite Cryotanks, which is researching carbon-fibre hydrogen fuel tanks for Australia's future zero-emission hydrogen economy and hydrogen vehicles.