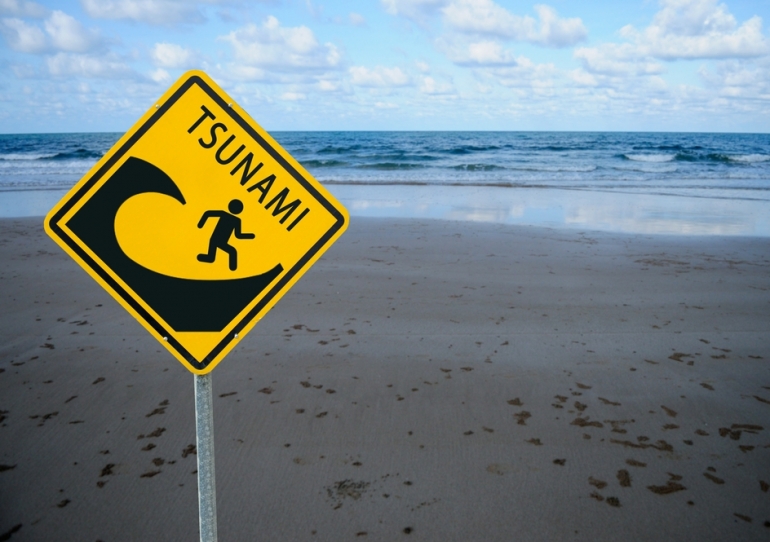 New research shows that Queensland's coastline would be in danger of significantly larger potential tsunami waves if coral cover on the Great Barrier Reef was removed. Photo: Shutterstock

The size and impact of Pacific Ocean tsunami waves on the Australian coastline are significantly reduced by healthy coral structures in the Great Barrier Reef, researchers have shown.

But their findings, published in the Natural Hazards journal, also indicate that areas of the Queensland coast would be in danger of increased damage from a tsunami if the coral was dead or dying and had lost its structural complexity.

The research was led by Dr Mandi Thran, a senior research associate at the Water Research Laboratory and UNSW School of Civil and Environmental Engineering, along with colleagues at the University of Sydney.

Using simulated models they were able to quantify, for the first time, that if the coral cover was removed completely there would be a 31% increase in offshore wave amplitude for a tsunami caused by a large-scale Mw9.0 earthquake in the Solomon Islands.

“We found that when we included rough coral cover, in our simulations, the tsunami waves were dampened,” Dr Thran says. “But when we removed that coral cover the waves actually grew in size.

The research team ran various computer simulations for different incidents that could feasibly cause a tsunami in the region — including earthquakes of strengths from 7.5Mw to 9.0Mw in the Solomon Islands, as well as landslides in and around the Great Barrier Reef itself.

For each simulation, the team first assumed the coral cover was healthy, with a rough and complex structure. They then re-ran the simulations for conditions where the coral was deemed to be smooth, such as it might be after being damaged by climate change.

Finally, models were analysed where the entire reef platform was removed, in order to assess the buffering capacity of the Great Barrier Reef itself.

Where coral structures were present, the key component was the ‘roughness’ of the coral on the reef, which is maximised when it is healthy and has a vibrant complex structure.

“Being able to monitor the reef’s health and being able to quantify how rough it is, that will better equip us with the ability to anticipate what the tsunami hazard will be,” Thran said.

“We can have a better gauge on how much more hazard there is for a particular area of the coastline if the health of the reef is declining or deteriorating.”

The phenomenon highlighted by the research is very similar to the way a lens will focus light, given the fact that reefs are generally circular.

As tsunami waves approach the reef they bend inwards, with the energy focused towards the reef platform and potentially causing the waves to grow bigger and more powerful.

However, when healthy ‘rough’ coral structures are present on the reef, there is a frictional force that counteracts the effect and dampens down the waves. 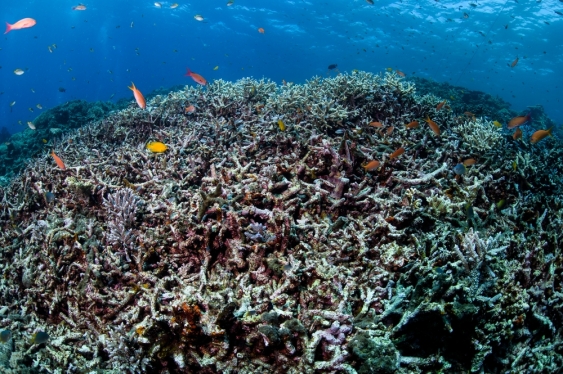 Research shows that dead coral which has lost its 'roughness' does not act as a dampner against potential tsunami waves, and could actually help to increase the amplitude of such waves. Photo: Shutterstock

The researchers also noted, though, that the positive effect caused by healthy Great Barrier Reef coral is just one aspect to be considered in terms of ongoing protection from potential tsunami damage. Risk awareness, hazard education, early warning systems and resilient infrastructure should also play a large part, they said.

But in terms of the reef structures, Professor Dale Dominey-Howes from the University of Sydney, who was a co-author of the paper, says it is vital to address the damage being done by the effects of climate change.

“The most significant finding is to demonstrate clearly, in a quantifiable way, the protective effects that healthy marine reefs can provide to adjacent low-lying coastal landscapes that are at risk from flooding and from tsunami events,” Prof. Dominey-Howes said.

“Healthy coral reef acts as a buffer, mitigating the effects of tsunami waves, although it doesn't reduce it to zero. But it can slow the wave down, which reduces the power of the wave to do damage to buildings and infrastructure in the adjacent coastal plain.

“Totally separate from the issue of tsunami risk is the fact that changing climate can damage coral reef ecosystems, potentially killing them. And if we do that, we're actually amplifying the risk associated with tsunamis by killing a natural protective barrier.