A mishap during an experiment led UNSW quantum computing researchers to crack a mystery that had stood since 1961.
Lachlan Gilbert | UNSW Newsroom 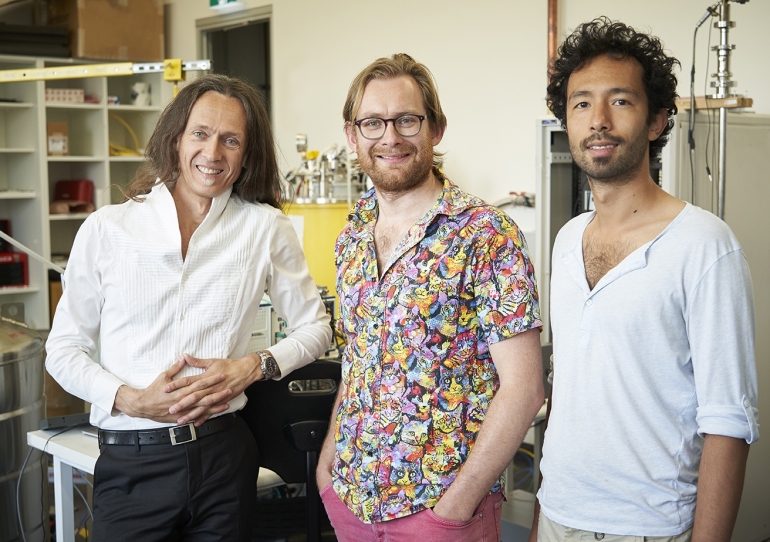 A happy accident in the laboratory has led to a breakthrough discovery that not only solved a problem that stood for more than half a century, but has major implications for the development of quantum computers and sensors.

In a study published today in Nature, a team of engineers at UNSW Sydney has done what a celebrated scientist first suggested in 1961 was possible, but has eluded everyone since: controlling the nucleus of a single atom using only electric fields.

“This discovery means that we now have a pathway to build quantum computers using single-atom spins without the need for any oscillating magnetic field for their operation,” says UNSW’s Scientia Professor of Quantum Engineering Andrea Morello. “Moreover, we can use these nuclei as exquisitely precise sensors of electric and magnetic fields, or to answer fundamental questions in quantum science.”

That a nuclear spin can be controlled with electric, instead of magnetic fields, has far-reaching consequences. Generating magnetic fields requires large coils and high currents, while the laws of physics dictate that it is difficult to confine magnetic fields to very small spaces – they tend to have a wide area of influence. Electric fields, on the other hand, can be produced at the tip of a tiny electrode, and they fall off very sharply away from the tip. This will make control of individual atoms placed in nanoelectronic devices much easier.

Professor Morello says the discovery shakes up the paradigm of nuclear magnetic resonance, a widely used technique in fields as disparate as medicine, chemistry, or mining.

“Nuclear magnetic resonance is one of the most widespread techniques in modern physics, chemistry, and even medicine or mining,” he says. “Doctors use it to see inside a patient’s body in great detail while mining companies use it to analyse rock samples. This all works extremely well, but for certain applications, the need to use magnetic fields to control and detect the nuclei can be a disadvantage.”

Professor Morello uses the analogy of a billiard table to explain the difference between controlling nuclear spins with magnetic and electric fields.

“Performing magnetic resonance is like trying to move a particular ball on a billiard table by lifting and shaking the whole table,” he says. “We'll move the intended ball, but we'll also move all the others.

“The breakthrough of electric resonance is like being handed an actual billiards stick to hit the ball exactly where you want it.”

Amazingly, Professor Morello was completely unaware that his team had cracked the longstanding problem of finding a way to control nuclear spins with electric fields, first suggested in 1961 by a pioneer of magnetic resonance and Nobel Laureate, Nicolaas Bloembergen.

“I have worked on spin resonance for 20 years of my life, but honestly, I had never heard of this idea of nuclear electric resonance,” Professor Morello says. “We ‘rediscovered’ this effect by complete accident – it would never have occurred to me to look for it. The whole field of nuclear electric resonance has been almost dormant for more than half a century, after the first attempts to demonstrate it proved too challenging.”

The researchers had originally set out to perform nuclear magnetic resonance on a single atom of antimony – an element that possesses a large nuclear spin. One of the lead authors of the work, Dr Serwan Asaad, explains: “Our original goal was to explore the boundary between the quantum world and the classical world, set by the chaotic behaviour of the nuclear spin. This was purely a curiosity-driven project, with no application in mind.”

“However, once we started the experiment, we realised that something was wrong. The nucleus behaved very strangely, refusing to respond at certain frequencies, but showing a strong response at others,” recalls Dr Vincent Mourik, also a lead author on the paper.

“This puzzled us for a while, until we had a ‘eureka moment’ and realised that we were doing electric resonance instead of magnetic resonance.”

Dr Asaad continued: “What happened is that we fabricated a device containing an antimony atom and a special antenna, optimized to create a high-frequency magnetic field to control the nucleus of the atom. Our experiment demands this magnetic field to be quite strong, so we applied a lot of power to the antenna, and we blew it up!” 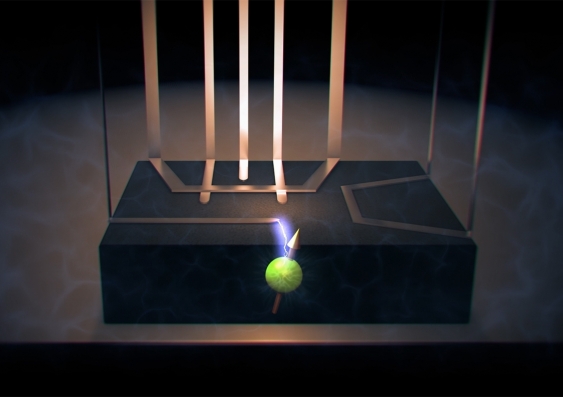 An artist’s impression of how a nanometer-scale electrode is used to locally control the quantum state of a single nucleus inside a silicon chip. Picture: UNSW/Tony Melov

“Normally, with smaller nuclei like phosphorus, when you blow up the antenna it’s ‘game over’ and you have to throw away the device,” says Dr Mourik.

“But with the antimony nucleus, the experiment continued to work. It turns out that after the damage, the antenna was creating a strong electric field instead of a magnetic field. So we ‘rediscovered’ nuclear electric resonance.”

After demonstrating the ability to control the nucleus with electric fields, the researchers used sophisticated computer modelling to understand how exactly the electric field influences the spin of the nucleus. This effort highlighted that nuclear electric resonance is a truly local, microscopic phenomenon: the electric field distorts the atomic bonds around the nucleus, causing it to reorient itself.

“This landmark result will open up a treasure trove of discoveries and applications,” says Professor Morello. “The system we created has enough complexity to study how the classical world we experience every day emerges from the quantum realm. Moreover, we can use its quantum complexity to build sensors of electromagnetic fields with vastly improved sensitivity. And all this, in a simple electronic device made in silicon, controlled with small voltages applied to a metal electrode.”