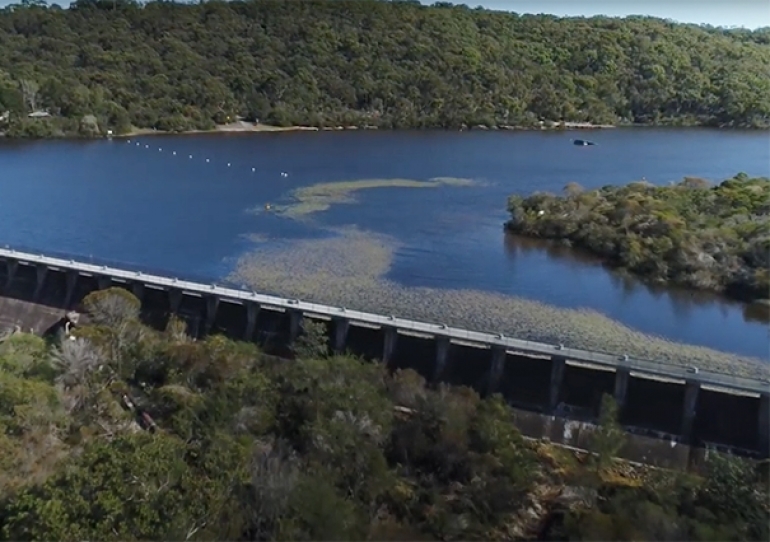 Engineers and scientists at UNSW Sydney have come up with an ingenious way to get fish past dam walls, weirs and other barriers blocking their migration in Australian rivers.

The so-called tube fishway is a low-cost and low-energy installation that works by pumping fish at high velocity – protected by a cushion of water – through a tube running over the obstructing barrier to deliver them safely into the water on the other side.

And following a successful demonstration of a prototype recently at the UNSW Water Research Laboratory in Manly Vale, the group is in talks with Parramatta City Council in Sydney about the possibility of installing one at the Marsden St Weir.

Tube fishways have the potential to reconnect populations of fish throughout Australia – and potentially the world – where barriers like dams and weirs in rivers are believed to be linked to a massive decline of freshwater fish stocks over the past half century.

Professor Richard Kingsford, Director of the Centre for Ecosystem Science, from UNSW School of Biological, Earth and Environmental Sciences, says dams, weirs and other river barriers have disrupted fish reproduction cycles the world over, as many river fish are prevented from migrating to spawn.

“Freshwater fish populations have declined by more than 80 per cent over the last four decades across the globe. This is partly due to the hundreds of thousands of our dams, weirs and barriers stopping their movements,” he says.

“Just in the Murray-Darling Basin rivers alone, there are 10,000 barriers of all kinds throughout the river system which have contributed to native fish numbers declining by 90 per cent. If we could reconnect our rivers and give fish the ability to navigate our rivers safely, we would see more breeding and healthier native fish populations in our rivers.”

Engineers and scientists in Australia have grappled with the problem for more than a century, and constructed many different types of fishways, helping fish to navigate past barriers. But these are expensive to install and maintain with some large ones often failing to adequately do the job.

With this in mind, UNSW scientists and engineers put their heads together to come up with a relatively inexpensive solution, easily adaptable to the local environment and leaving only a small carbon footprint.

On a rugged slope behind the campus building, two large tanks were each connected by two pipes that pumped water to and fro. In the tank at the bottom of the slope, a small Australian bass fish was coaxed into a chamber before being propelled at high speed in oxygenated water through a Perspex tube into a tank further up the slope – a whole eight metres higher in elevation.

“A key issue is attracting fish into a pipe so that we can move them up the slope with the new fishway,” Professor Peirson says.

“Dr Harris showed that with appropriate geometries, fish can be reliably attracted into the chamber. The beauty of the design is that it uses the energy available from the reservoir above to then lift the fish.”

In a commercial setting, installations of the tube fishway would use connecting tubes considerably larger than the 90mm one used in the prototype.

“Our numerical modelling work shows that this system will work reliably for pipes at least one metre in diameter, lifting fish more than 100m vertically. This is potentially a game changer in the ecological management of large dams,” says Professor Peirson.

“A challenge that we are just commencing to address is getting the fish downstream in the river. This is not important for small structures – they just swim down with the flow. However, for high structures they can be killed by impacts in the overflow and we need to find gentler ways for them to descend large dams.”

The group is looking for opportunities to implement the tube fishway in a commercial installation  and is currently in talks with Parramatta City Council about the potential to install one at Parramatta’s Marsden St Weir – to allow wild fish to move upstream.

“Many of our weirs are very old – created to provide water supplies during Australia’s long droughts. It is exciting to think that within the next few years, wild fish might be able to migrate along a river for the first time in more than a century,” Professor Peirson says.

Some of the challenges that the group faces as they move from the laboratory into the field include ensuring that the function of the original river structure is not diminished while promoting the health of the fish stocks using these waterways.

“There’s no reason why we can’t have dams and healthy river systems at the same time,” Professor Peirson says.

“Any fishway must not compromise the safety of the weir or dam. The fishway must also demonstrate that it can operate reliably before and after the very powerful floods we have here in Australia.

“Dams are important for maintaining our water supplies during droughts but they greatly disrupt our river systems. There is now real prospect that we can allow fish to migrate as they should and significantly restore our river ecosystems.”