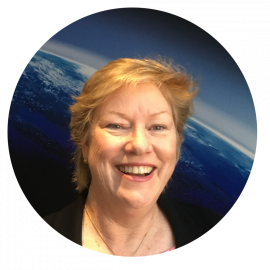 ‘I love science, I love working in science. I love putting science to use to make incredible value for both the nation and for improving the lives of people.’

This month, we’re turning the spotlight on one of Australia’s most inspiring STEM leaders, Dr Megan Clark AC. Read on to find out how an inspiring science experience in high school led her to pursue a STEM career which has seen her become the first-ever head of the Australian Space Agency. Her path to this role goes to show that STEM degrees can take you far and wide, from geology to finance and mines to Mars!

Dr Clark grew up in Perth and attended Presbyterian Ladies’ College during high school. She initially wanted to be an industrial chemist so took many science subjects in her senior years including Maths, Physics and Chemistry. She also studied English and French and her school reports often featured comments like ‘Talks too much’!

Fun fact: Dr Clark’s primary school headmaster didn’t believe in homework so for her first seven years of schooling, Dr Clark did very little homework and played a lot in the bush near her house.

This experience made Dr Clark realise that STEM was an exciting and viable career path, motivating her to enrol in a Bachelor of Science (Geology) at the University of Western Australia. After completing her honours year, Dr Clark moved to Canada to pursue a PhD in Economic Geology. This just goes to show that STEM studies can take you around the world!

Fun fact: All UNSW engineering programs have a compulsory honours program built into them. This means that in your final year, you pick a topic and conduct new and impactful research with the guidance of an academic. From developing catalysts which remove CO2 in the atmosphere to designing new water filtration techniques for developing countries, who knows what project you might work on!

Dr Clark started her career as a mine and exploration geologist with the Western Mining Corporation. She stayed at the company for 15 years, enabling her to expand her knowledge and move into roles not typically associated with STEM like venture capitalism (deciding which new start-up companies and technologies to invest in).

Using her comprehensive knowledge of economics and STEM, Dr Clark went on to lead a high-tech venture capital fund. From here, she moved to a company all of us know well – BHP Billiton – where she was Vice President of Technology and then Vice President of Health, Safety, Environment, Community and Sustainability.

Dr Clark’s early career shows how versatile a STEM degree can be. Whilst Dr Clark initially trained in STEM, she was able to transfer her skills and knowledge to succeed in a completely new industry – finance. Moving between different industries is very common for STEM graduates, especially engineers, where it is estimated that up to 75% of graduates do not work in the fields they study at university.

In 2009, Dr Clark became the first female chief executive of our national science agency – CSIRO. Under Dr Clark’s leadership, CSIRO made many advances in science which have real and widespread impacts on improving people’s lives, like cancer blood tests and bushfire apps. Check out the latest CSIRO discoveries here!

Did you know that in 2017, Australia opened its very own space agency? With her years of experience in executive roles and her knowledge of both STEM and finance, it came as no surprise that Dr Clark was announced as the inaugural head of the Australian Space Agency – rocketing through another glass ceiling.

Under Dr Clark’s leadership, the Australian Space Agency has developed rapidly. Within two years, they have built many important national links with industry and have partnered with other national space agencies such as (you guessed it!) NASA. They’ve even announced a Moon to Mars initiative, investing money in Australian businesses and research which supports NASA’s vision to send humans to the Moon and Mars (read more about it here).

The timely establishment of the Australian Space Agency demonstrates just how important this field of STEM is becoming. Both the Australian and global space industry hold the jobs of the future which will require a ‘high-tech workforce’, as noted by Dr Clark. STEM degrees, such as Aeronautical Engineering, offer an excellent path into this field. So, if you’re interested in space, consider pursuing STEM after school . . . Who knows where it might rocket you off to?

Check out the October GIE challenge for the chance to win a book signed by Dr Clark.

Tags
lensGirls in Engineering
lensQ + A with ...