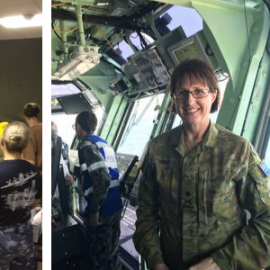 Major General Kathryn Toohey joined the Australian Army in 1987 and has led a distinguished career since then. Today, she is the Head Land Capability, responsible for considering what equipment the Army needs, but is in the process of transitioning to a new role as Head Force Integration for the whole Australian Defence Force. She gained her Bachelor of Electrical Engineering at UNSW Canberra in 1991.

What will your new role involve?

I’ll be responsible for ensuring the Army, Navy and Air Force are able to work together. In very broad terms this means that their radio and network systems are able to interoperate.

I like being part of a team and I wanted to challenge myself. I was also attracted to the Australian Defence Force Academy and UNSW Canberra because it has some of the best staff student ratios in the country. As an Army officer cadet an added bonus was that I was paid to attend university.

Can you describe a career highlight – perhaps an insurmountable problem that you managed to solve or a solution that exceeded all expectations?

In 1992, straight after graduating, I went to Cambodia as part of the United Nations Transitional Authority Cambodia (UNTAC) to help conduct the country’s first democratic elections since the Khmer Rouge. The Khmer Rouge was a very repressive regime that ruled between the mid to late 1970s and killed almost two million Cambodian citizens. They also laid millions of landmines and destroyed the nation’s infrastructure and communications networks.

I coordinated 100 soldiers, sailors and airmen and women to travel nationwide, via road, river and plane, to install new switchboards, data centres and satellite terminals in difficult circumstances. It was extremely busy and we always had to be alert to potential dangers. This experience taught me the value of detailed planning, the importance of honest communication with team members and personal resilience.

What is your fondest memory from UNSW Canberra?

Strangely enough, passing Physics 1 is one of my fondest memories. Along with many of my classmates I failed the first exam. I studied like crazy for the second exam and still remember the wave of euphoria (and relief) when I passed. It was a true lesson in the importance of working hard.

What innovations are the most exciting in defence at the moment?

Advances in robotics and Artificial Intelligence (AI) mean that in the very near future, we may be able to get robots to do some of the dull, dirty and dangerous jobs that our soldiers currently do. Additive manufacturing (3D printing) is also exciting as it might help us manufacture spare parts for equipment in the field. In order to enable these new technologies, we must ensure our data is well-managed.

What are the most important skills that engineers need to thrive today?

Problems are increasingly complex so I think engineers need to be able to think at the systems level, to connect concepts and ideas from different disciplines and enlist the support of teams. They also need to be creative and prepared to challenge the status quo.

Tags
lensGirls in Engineering
lensQ + A with ...