The slippery science of Olympic curling: we still don’t know how it works

The game of curling is centuries old, but exactly what makes the stones curl as they slide over the ice is still a mystery. 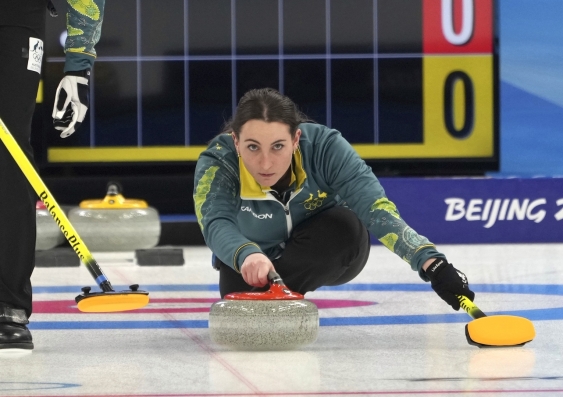 Australia’s first ever Olympic curling team scored an historic win but missed the medal podium at the 2022 Winter Olympic Games in Beijing. It was a remarkable performance for a team lacking any dedicated curling facilities at home.

And that’s important, because it is the special properties of curling ice that allow the heavy curling stones to glide and curve in ways that seem to defy physics. In fact, scientists are still not sure what puts the “curl” in curling.

Curling’s origins date back to 16th-century Scotland, making it one of the world’s oldest team sports. Like golf – invented around the same time in the same part of the world – curling seems both amusingly pointless and deceptively simple to the untrained eye.

It has been called “chess on ice”, although to many Australians it most resembles frozen lawn bowls. Athletes take turns sliding circular 20-kilogram granite stones along the ice toward the centre of a horizontal target 28 metres away. Teams are awarded points for getting their stones closest to the centre of the target, or “house”.

The slippery science behind curling starts with the ice itself. Curling ice must be perfectly flat – far flatter than a typical ice hockey rink – and is sprayed with droplets of water before each game to produce a pebbled surface. This minimises the contact area between the ice and the heavy curling stone.

Curling stones also have a concave lower surface – like the bottom of a beer bottle – that further reduces the contact area between the stone and the ice. The effect is to increase the pressure at the base of the stone, partially melting the ice and reducing friction in a similar way to how ice skates work.

Uniquely among Olympic sports, curling players can change the path of the stone after it has been “thrown”. This is achieved by vigorously sweeping the ice in front of the stone with special brooms that warm the ice and reduce friction, allowing the stone to travel farther and straighter along its path.

Deciding when, where, and how hard to sweep has a big influence on the stone’s trajectory; so naturally it is accompanied by a great deal of enthusiastic yelling.

Give it a spin

Let’s start with a (literal) tabletop experiment. Slide an upturned glass along a table, adding a little spin as it leaves your hand. With a little practice (and perhaps a few replacement glasses) you will be able to make the glass trace a curving path across the table, deflecting to the left when you spin it clockwise or to the right when you spin it anticlockwise.

The reason for this is explained by a branch of science called tribology, which studies the effect of friction on moving and sliding objects.

As the glass spins, it rubs against the table top, generating friction that tries to slow down the rotation of the glass. The friction forces are directed opposite to the direction of motion: for a clockwise-rotating glass, friction will be directed to the left at the front of the glass and to the right at the back of the glass.

When the spinning glass slides across the table, it leans forward slightly in the direction of travel, pushing the front lip of the glass down a little harder on the table than the trailing lip. The extra pressure generates extra friction at the front compared to the back. The resulting imbalance of friction forces causes the glass to deflect in the direction of stronger friction – to the left in the case of a clockwise-rotating glass.

A twist in the tale

But curling stones behave in exactly the opposite way: a clockwise rotation causes the stone to deflect to the right, not the left. For a long time, scientists assumed this was because of an effect called asymmetrical friction.

The theory goes like this: like a glass pushed across a table, a curling stone leans forward slightly. The extra pressure at the front of the stone partially melts the ice at the leading edge, creating a thin film of water that reduces the friction at the front of stone compared with the back.

The curling stone will still deflect in the direction of stronger friction. But in this case, it is the trailing edge that wins, resulting in a deflection to the right rather than the left, for a clockwise-rotating stone.

Like many theories, this explanation was widely accepted until someone got around to actually testing it. In 2012, a team at Uppsala University in Sweden made detailed calculations of the friction forces acting on a sliding stone.

The problem they found is that curling stones rotate quite slowly, only completing a couple of turns before coming to a stop. This spin is far too small to cause a sideways deflection of a metre or more. Even odder, more rotation does not lead to more curl – in fact, spin a stone too hard and it won’t curl at all. Asymmetrical friction cannot explain such behaviour. 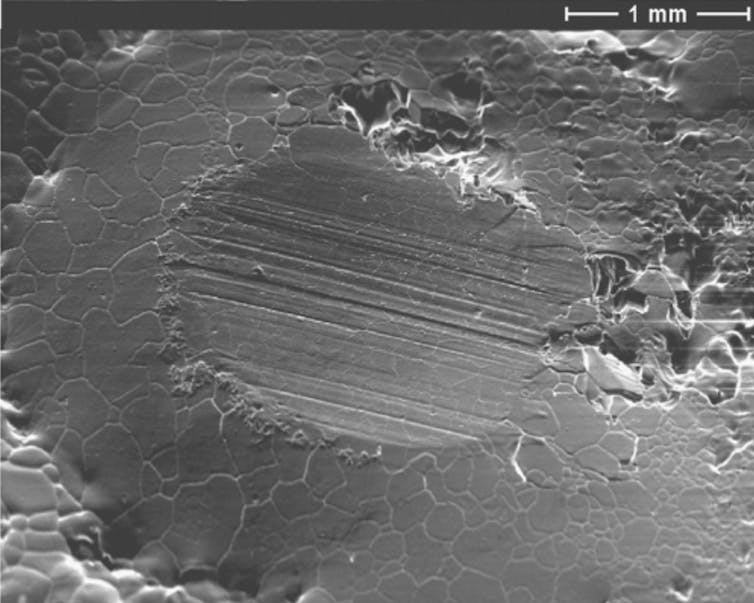 Curling stones make microscopic scratches in the pebbled surface of the ice - and according to one theory, these scratches deflect the stone’s path to the left or right. H. Nyberg, et al., Wear (2013)

The Swedish team then showed that, using this “scratch-guide” mechanism, they could “steer” the sliding stones by adding artificial scratches to the ice in different directions. In one experiment, a stone was made to travel along a zigzag path by laying down scratches in alternating directions.

Their findings ignited a minor controversy in the admittedly niche world of curling physics.

Competing theories have been proposed, including the pivot-slide model, the evaporation-abrasion model, and the snowplow model.

In 2020, a Japanese team attempted to clear things up by systematically testing each theory in a curling hall using sophisticated motion-tracking equipment, a laser scanning microscope, and some sheets of sandpaper to modify the surface of the curling stone.

However, no clear winner emerged. When it comes to the science of curling, it appears we are just scratching the surface.