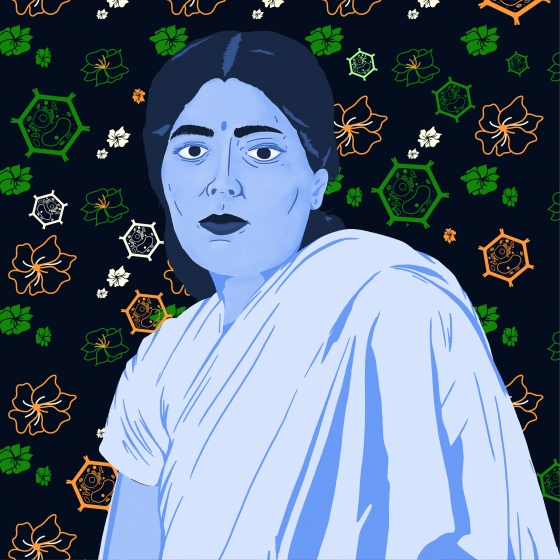 The botanist who sweetened a nation.

Edavaleth Kakkat (E.K.) Janaki Ammal was born on 5 November 1897 in the southwest Indian state of Kerala, during British Raj.1 Ammal was the tenth in a blended family of 19 brothers and sisters. Her father was from an educated family of the Tiyya caste but suffered a substantial loss in status as he married a mixed-race woman.2 As a “White Tiyya”, Ammal’s childhood was characterised by an incomplete sense of belonging and a conflicting blend of two cultures.2 Although the family was not financially well-off, the children received a British education. This afforded the prospect of upward mobility in an otherwise rigid caste system that denied opportunities to members of lower castes such as the Tiyyas.3

Ammal’s father encouraged her interest in the natural sciences –  by writing a book on the birds of North Malabar and maintaining a pristine garden in their seaside ancestral home, Edathil.2  While many of her sisters wed through arranged marriages, Ammal embarked on a journey of scholarship – receiving a bachelor’s degree from Queen Mary’s College in Madras and an honours degree in botany from the Presidency College.4 This was a particularly notable accomplishment considering the literacy rate for women in India was less than one per cent at the time.5

While teaching at the Women’s Christian College in Madras, Ammal was offered the University of Michigan’s Barbour Scholarship.6 Ammal specialised in plant cytology and genetics, with a focus on breeding hybrids. She earned her doctorate in 1931, making her the first woman of Indian descent to receive that degree in botany in the United States.6 Notably, Ammal hybridised native sugarcane varieties to produce a sweeter crop that thrived in the Indian climate.7 In 1940, Ammal moved to England to work at the John Innes Institute, where she co-authored the Chromosome Atlas of Cultivated Plants8, which remains an important reference text in botany. Ammal also became the first salaried female staff member of England’s Royal Horticultural Society in 1946.2

Ammal returned to a newly independent India in 1948 and was appointed the head of the Central Botanical Laboratory.2 Simultaneously, she led the reorganisation of the Botanical Survey of India, which aimed to collect and survey native flora. Ammal aimed to preserve indigenous plants under threat from development policies such as the “Grow More Food” campaigns responsible for significant deforestation.9 In 1955, Ammal attended an international symposium where she gave a landmark talk on India’s subsistence economy and the significance of tribal populations and their cultivation of native plants.10 She also highlighted the importance of matrilineal traditions that valued women as managers of property and condemned the mass production of cereals at the cost of indigenous flora.10

At the end of her career, Ammal leveraged her influence to join the campaign against the destruction of the Silent Valley in Kerala.11 She contributed significantly to increasing awareness and understanding of the important role of endemic species in maintaining the biodiversity of the Western Ghats.12 The Silent Valley was declared a National Park on 15 November 1984 - nine months after Ammal had passed away, aged 87 and still actively researching in her laboratory.11