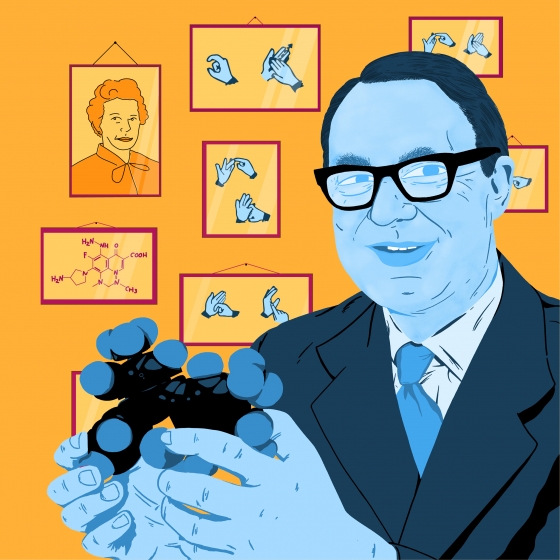 Born in Sydney on 7 September 1917, Sir John Warcup Cornforth was a British-Australian chemist who most notably won the Nobel Prize in Chemistry in 1975, being the first and only Australian to be acknowledged in the category to date.2 As a child growing up in the 1920’s Sydney, John attended Sydney Boy’s High School, where he excelled in languages, maths and science, eventually graduating as dux of his class at the age of 16. Following this, he completed a Bachelor of Science at the University of Sydney, majoring in organic chemistry and graduating with first class honours as well as a University Medal.1

Throughout the majority of his adult life, Professor Cornforth was completely deaf due to the development of signs of otosclerosis from an early age, eventuating in complete deafness by the age of 20.3 With signs of hearing loss occurring since the age of 10, John was faced with a difficult life ahead, considering the relative lack of resources available for the hearing impaired during the early 1930s.

During his studies, John met his wife Rita, who was also a biochemist that went on to achieve her own distinguished career. In 1939 they both received separate scholarships to continue their studies internationally and, in 1941, he completed his PhD in Organic Chemistry at Oxford University.3

As a chemist at Oxford during the Second World War, Professor Cornforth was tasked with research on penicillin to aid the allies during the conflict. Building from the work of fellow Australian Howard Florey, he was able to synthesise D-penicillamine, an important fragment of the penicillin molecule and a major step in preparation for its mass production.

Whilst awarded numerous prestigious awards throughout his career, Professor Cornforth’s greatest achievement was undoubtedly receiving the 1975 Nobel Prize in Chemistry for his work on the stereochemistry of enzyme-catalysed reactions, shared with Vladimir Prelog.2 This work focussed on the biosynthesis and identification of components within cholesterol and was the first example of a total synthesis of a non-aromatic steroid.

Although always having a passion for the sciences, he attributed his choice to go into chemistry to his high school science teacher Mr Leonard Basser, who acted as a mentor and encouraged Dr Cornforth towards a field where his abilities could be best utilised.3 His wife Rita was also one of his strongest supports; throughout both their marriage and research collaborations, she encouraged him and helped him communicate, enabling him to achieve success.3