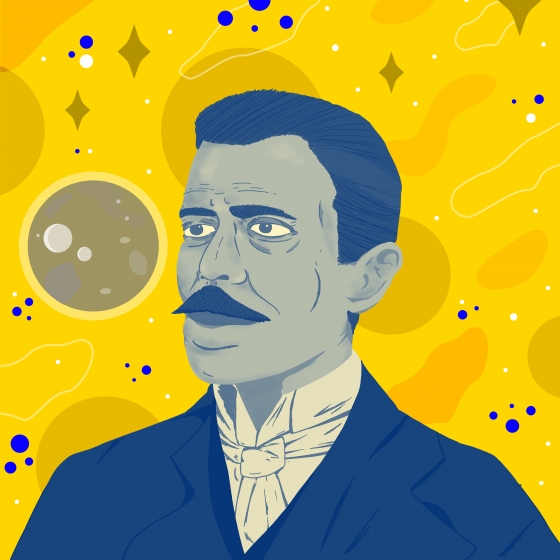 From Colombia to the moon.

On 5 January 1865, Julio Garavito Armero was born to a wealthy family in Bogotá, Colombia. He was only eight years old when his father, a recognised trader at the time, died a few years after the family business went bankrupt. However, despite the situation, Julio Garavito started high school at the age of ten and stood out as a child prodigy in science and mathematics.1

By the time he graduated high school in 1884, Colombia, a rather young nation, was facing multiple civil wars that stopped universities from offering lectures between 1885 and 1887. Regardless, in 1891, he graduated as a mathematician and civil engineer from the Colombian National University after submitting and defending three different theses. For his first mathematics thesis, he proposed a probabilistic approach to calculating pi, while for his second, he calculated all the mathematical possibilities that a pressure gauge could have. In his final thesis, this one in engineering, Julio Garavito proposed a triangular structure to build bridges2,3  – just like the Sydney Harbour Bridge!

Based on his exceptional academic performance, Julio Garavito was immediately appointed head of the National Astronomical Observatory in 1892, the most prestigious scientific position in Colombia at the time. He took advantage of this opportunity to make significant contributions to astronomy. In this role, Garavito and co-workers studied the trajectory of multiple comets that passed by Earth between 1901 and 1910, including Halley’s Comet. He also studied the trajectories of the Moon, providing key insights into how the Moon’s orbits can influence meteorological phenomena on Earth. These contributions were later recognised by the International Astronomical Union, which named one of the Moon’s far-side craters Garavito. This 81km-wide crater lies next to other craters named after such well-known scientists as Curie, Poincare, Pauli and Lyman4.

Alongside his passion for astronomy, Julio Garavito Armero made several contributions in other fields. He travelled Colombia, mapping the position of the stars in the night sky to provide some of the first detailed maps of the country, defining regions and international borders. Julio Garavito was also interested in economics and published studies describing potential alternatives to overcome the country’s economic crisis after the civil wars. Some historians even classify Julio Garavito as an early science communicator, as he was commonly asked to provide accessible explanations to the public regarding natural phenomena such as eclipses and earthquakes.5–7

For 28 years, Julio Garavito Armero served as head of the National Astronomical Observatory, performing an outstanding job characterised by his commitment and dedication. He passed away at the age of 55 on 11 March 1920 from a severe case of tuberculosis, only four years after his wife’s death.