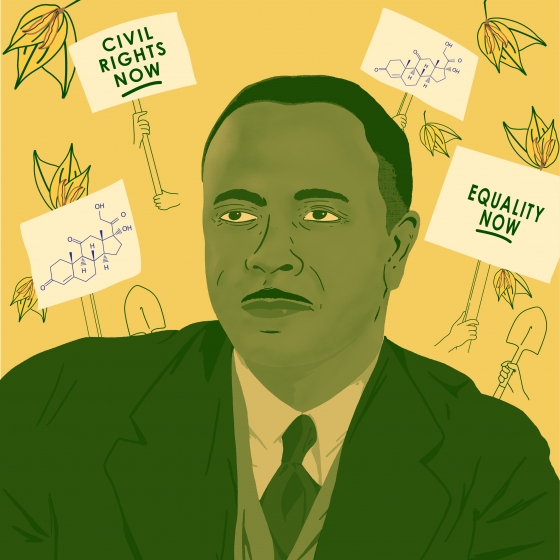 Perseverance, drive and a lifetime of extraordinary.

Dr Percy L. Julian was an American research scientist and an innovator in the chemical synthesis of medicinal drugs. He is credited as the first person to synthesise physostigmine (eserine), a medication effective in treating glaucoma and constructing a method to mass-produce cortisone, a drug commonly used to relieve pain from rheumatoid arthritis.1 Atop of his success within the field of chemistry, Percy Lavon Julian also fought for civil rights for more than 50 years.2

Percy Julian was born the grandson of an enslaved person on Jefferson Davis Avenue in Montgomery, Alabama, on 11 April 1899. His father worked as a railway clerk and his mother as a schoolteacher. From the beginning of his formal education, Julian performed well; however, African Americans were not allowed to attend public high school in Montgomery. At the age of 16, despite graduating inadequately prepared for college, Julian was accepted as a “sub freshman” at DePauw University in Greencastle, Indiana.3 When reflecting on his past, Julian recounted the story of his grandfather waving him off on his way towards DePauw University with two fingers missing from his hand. A punishment he received from learning to read.4 Julian was prohibited from living in a college dormitory and had to find space in an attic of a fraternity. Working as a waiter and a ditch digger, Julian took most of his classes in the evening. Even so, Julian found himself named class valedictorian in 1920. Despite his academic achievements, his teachers informed him that there were no opportunities for ‘those of his colour’.5 Over the following two years, Julian would work as an instructor in chemistry at Fisk University, Nashville, Tennessee. In 1923 he was awarded a fellowship to Harvard, where he studied for his master’s degree in biophysics and organic chemistry.

In a realisation that Julian recounts as not only discouraging but traumatic, he was once again denied further opportunity to pursue doctorate-level study on account of his racial background.5 Leaving Harvard, he joined the faculty of West Virginia State College Institute in a teaching position for chemistry before being awarded a Rockefeller Foundation fellowship in 1929 to pursue a doctoral degree from the University of Vienna.2 Two years later, Julian returned to DePauw, where he began his work with physostigmine. Julian raced against a distinguished research group at Oxford University to be the first scientist with a correct route for the drug’s synthesis. Convinced his method was correct, Julian went as far as to add a statement on his rival’s work declaring that the group had made an error. Had Julian incorrectly challenged the work of the renowned chemist Sir Robert Robinson, his career would have surely been spoiled. However, his synthesis was confirmed and cited by the American Chemical Society as one of the landmark achievements in American chemistry.1

The story of Percy Julian is one which at face value moves from success to success. However, Julian was continually marginalised throughout his lifetime. His well-deserved election to the National Academy of Sciences came after decades of work “worthy of a Nobel Prize”, yet on acceptance of the award, he faced intense vocal opposition.1 In his later life, Julian continued his biomedical work and, in 1954, established his own laboratory, Julian Laboratories.4 Eventually selling the company in 1961, becoming one of the first African American millionaires, Julian continued his private research studies until his death on 19 April 1975.5