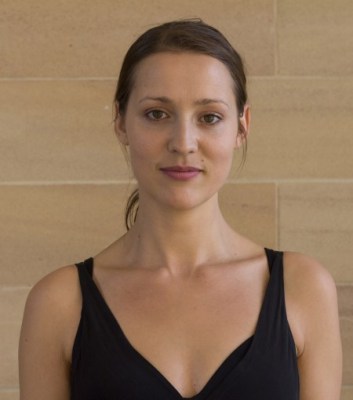 Tell me about your current role....

I’m a freelance vocalist trained in classical singing, though I’m now performing mostly improvised, experimental and new music. I collaborate with people across disciplines, and also like to write and curate programs for performance.

A typical day is usually made up of thinking, writing, coffee-induced art philosophising, rehearsing, admin, marketing and performing- some combination of these!

What is one thing you love about your job?

Having complete artistic control and the capacity for authentic artistic expression.

How do you stay focused and inspired in what you do?

I think maintaining a sense of balance in my life leads to inspiration and focus. I lose both of those things when I’m doing too much of one thing. For example, indulging in visual art usually sparks musical ideas, and also just switching off from ‘productivity’ for some R&R time is reinvigorating and essential. I also have a thriving relationship with matcha.

Did you imagine this would be your career? What would a 17-year-old Sonya think of what you are doing now?

No, I didn’t when I was growing up. I started considering music as a career in my early twenties and took some steps to eventually enter university- steps beginning with TAFE, getting an HSC equivalent through the University Preparation Program and cramming a few grades worth of music theory. 17 year old Sonya would be a combination of surprised, relieved, amused, proud and happy, I think.

Why did you decide to do a Bachelor of Music degree at UNSW?

I actually didn’t audition for any other institutions as I had such a strong feeling that UNSW was the uni for me. The music course seemed to be more open, diverse and fluid than some of the programs at other universities, while offering a very high standard of education.

What was your Bachelor of Music at UNSW like?

I’m trying to think of an accurate simile, but in the meantime- It was incredible to be immersed in music of all kinds, every day, with other music enthusiasts from varied backgrounds. It was great taking extra-musical subjects as well like dance, ancient Hebrew and life drawing- it kept things really interesting and provided a rich and fulfilling educational experience. I also felt pretty cool doing a degree in music, reinforced by people from other faculties who would complain of being bored in their degree.

What is your best memory of your Bachelor of Music degree?

Some of the people I met are still good friends or colleagues, so meeting them I’d consider some of my best memories. There were also some subjects that I really loved, like Indian music and 20th Century music, both of which have influenced my practice a lot. Extra-curricular undertakings like being part of the choir and the Burgundian Consort were great fun and were also great training grounds where I gained a lot of skills I now rely upon in my practice.

How do you feel that your Bachelor of Music degree shaped your career?

It helped to lay a really solid foundation of music theory and performance. It also exposed me to a broad range of music, including ‘new music’ of the 20th and 21st centuries, and early music, both of which I loved and continued to focus on after uni. It also allowed me to indulge other aspects of my creative self such as visual and embodied creativity through art and dance subjects, and I now love to work in a similarly interdisciplinary manner through my collaborations with other arts practitioners.

What is the most valuable thing you took away from your time at UNSW?

A sense of accomplishment and a feisty determination to continue on the path of pursuing an authentic, fulfilling arts career.

Where have you worked since graduating?

After graduating I began my career as Young Artist with the Song Company and am now mostly freelancing as a soloist or with various ensembles. I play at a broad range of events and festivals and collaborate with a range of artists across disciplines, while also curating and producing my own shows. I’ve recently begun writing about my practice and would love to do more writing in the realm of experimental music and art philosophy.

What advice would you give to someone trying to decide if they should sign up for a Bachelor of Music degree?

It would depend on why they’re questioning it! Obviously I would recommend it to anyone because music is rad, but really you need to take the time to reflect on where your own passions lie, though sometimes this only happens through acting on your suspicions. I also believe it’s never too late to try something new, and am always inspired by people who take risks and bold career detours, led by their heart and their instincts.

Sonya will soon be embarking on a 2 month period of travel to Canada and New York. Her plans include a residency at the Banff Centre, performances and collaborations across both countries, and undertaking research to develop her practice. She has also recently launched a new online arts publication, for which she writes and is co-editor. Check it out here.