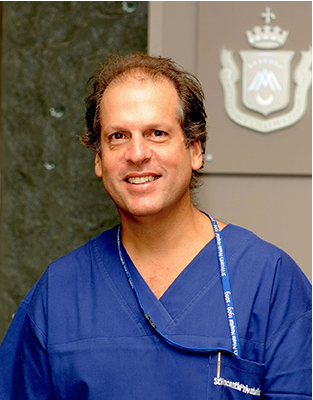 9th Annual Congress of the International Society for Gynaecologic Endoscopy, Brisbane Australia
May 2000 - Scientific presentation award for “Inappropriate secretion of ADH during laparoscopic surgery and its physiological implications.”

Over the last 25 postgraduate years, I have been actively involved in the teaching of medical and nursing staff. Particularly at a post-Membership level, this has involved the teaching and supervision of junior medical staff during operative obstetrics and gynaecological surgery.

As a fellow in Endo-Gynaecology, that role expanded to also include supervision and training of registrars, consultants, and overseas visiting doctors in both live endoscopic surgery and in our simulated endoscopic laboratory. This has also included presentation of research, evidence based practices, clinical audits, and cost-effective practices at hospital meetings.

In May 2001, with the support of St Vincent's Campus, I established a laparoscopic training facility at the Garvan Institute, Darlinghurst. This has allowed the opportunity for surgeons in various specialties as well as surgical nursing staff to train in an inanimate laparoscopic setting. Over the last 10 years, this training focus has expanded to training centers at St Vincent’s General Hospital and St Vincent’s Clinic. This enables regular access and training to the aforementioned staff.

My role as locum for Professor Vancaillie practice, also saw me involved with colleagues in the co-ordination and administration of the Department of Endogynaecology at the Royal Hospital for Women. This was both a training and supervisory role for registrars and consultants with regards to the theory and surgical performance of laparoscopic and hysteroscopic procedures at that hospital and at a RANZCOG level.

In 2002-2003, in conjunction with the department of nursing and University of New South Wales, the first Perioperative Laparoscopic Program in Australia was established and successfully run at St Vincent’s Campus. This has enabled a much needed training in new technologies and techniques for both the campus staff and nursing staff attending from outside our St Vincent’s Mater campus.

From 2003-2010, my role as Director of Clinical Training at St Vincent’s Hospital has required a broader involvement in both preparation of Intern/RMO education programs and its administrative role as part of the Post Graduate Medical Council. In 2007 we re-certified with NSW Institute of Medical Education and Training for a further 3 years accreditation for PGY 1 and 2 trainees.  This role has allowed me to have direct involvement with literally hundreds of PGY 1 and 2 trainees over a decade.  Extensive revision of education programs, hands on basic procedural training and simulation training as well as career development were important changes made by this role over the years.

From 2005 I was directly involved in establishing the first Robotic Gynaecological surgical program in the Southern Hemisphere.  Training of nursing and medical staff for this role was carried out including taking staff to USA to various surgical centres for inanimate, animal and live patient surgical procedures.  We then incorporated a carefully structured training program on campus initially in an inanimate setting.  We then translated this to each of all gynaecological procedures carried out to date allowing us to evaluate
the role, safety and potential risks and benefits of robotic surgery on a gynaecological population.

From 2002-2015 my association with the University of NSW and later the University of Notre Dame has seen a strong involvement in medical student education as well as involving students from those campuses within our surgical team in both clinical and theoretical training.

Our fellowship training program which has been run over that time has seen very hands on training of senior fellows from RANZCOG within our service. Each year sees one or two fellowship positions attached to our unit and normally represent a year 5, year 6 or post fellowship position for training within advanced surgical gynaecology.  Within that training program has been development of inanimate training, robotic training and computer simulation training which has enabled a safe progress from a non patient to real-patient live surgery for advanced surgical techniques.