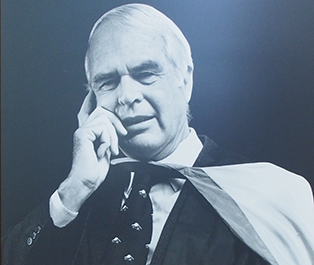 "Richard Clough succeeded Professor Peter Spooner as the second Professor of Landscape Architecture and Head of the School of Landscape Architecture at UNSW in 1981. He brought to the program immense experience in landscape design from his 22 years with the National Capital Development Commission, overseeing the largest work of landscape architecture ever undertaken in Australia – the mid-twentieth century modernist reinterpretation of Walter Burley Griffin’s plan for the symbolic centre of Canberra. Professor Clough combined deep knowledge of plants, ecology and site engineering with a command of landscape space and sculptural form. His fundamental approach was cultural, informed by the eastern and western traditions of landscape design and his original research into the history of landscape architecture and garden art in Australia. In all these matters and more, he was the embodiment of wisdom communicated in his distinctive way with humour and brilliance." – Professor James Weirick

"On behalf of the Landscape Architecture Program, we honour Professor Richard Clough’s profound  influence on landscape education at the University of New South Wales, following a significant career in which he shaped the landscapes of Australia’s national capital and contributed to the founding of a new professional institute of landscape architecture. We were delighted to welcome Professor Clough back to campus in August this year to celebrate the Bachelor of Landscape Architecture’s 40th anniversary—an event during which he took great pleasure in reuniting with colleagues and students from past and present. Our sincere condolences go out to this family and friends at this time." -  Associate Professor Linda Corkery, Director of Discipline, Landscape Architecture