Do we only have space for about 150 people in our lives?

Is it true that for our entire history humans have associated with about 150 other people? Darren Curnoe checks the facts. 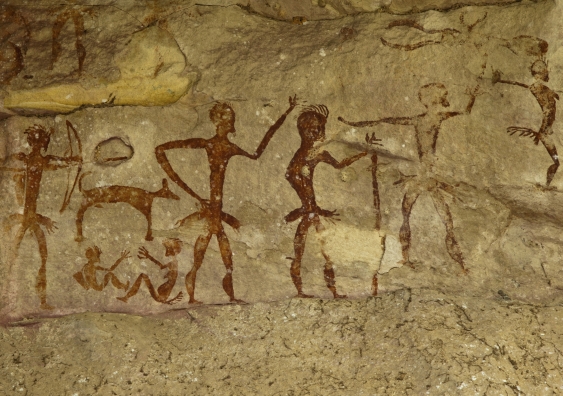 We, on average, for our entire history have associated with about 150 other people, and now after millions of years of doing that, we are a very social animal. – Professor of population studies at Stanford University, author and ecologist Paul Ehrlich, speaking on Q&A, November 2, 2015.

When asked to elaborate on his Q&A comment, Professor Ehrlich told The Conversation by email that:

The Dunbar (Robin Dunbar) number is ~150, size of hunter gatherer groups, still length of Christmas lists, and so on. My point was we’re a small-group social animal now suddenly (in cultural evolution time) trying to find ways to live in gigantic groups.

But does 150 really represent the ideal number of people we have all evolved to interact with socially?

The theory emerged from a series of studies beginning in 1992 by Robin Dunbar, a primatologist based at University College London. The studies aimed to understand the evolution of the large brain, especially the neocortex, of primates including humans.

The neocortex is the balloon-like, highly folded, outer part of the mammalian brain, which in humans is associated with higher cognitive functions like planning and executive control.

Dunbar proposed that his number, 150, “predicts a ‘natural’ cognitive community size for humans”.

But let’s be clear up front: this number does not derive from an ecological principle or evolutionary law governing the way complex species like primates naturally organise themselves.

Instead, it is an estimate – a prediction – derived from an equation Dunbar used to describe the statistical association between neocortex size and the number of individuals typically living in the social groups of various primate species.

While his research has been widely cited and influential, especially in the social sciences and humanities, it has been very controversial. Indeed, it has been the subject of strong criticism in primatology and cognitive and experimental psychology.

So, what’s controversial about Dunbar’s number?

A bewildering array of correlations

First of all, it’s now well understood that larger sized mammals possess a larger neocortex: it comprises about 87% of a sperm whale’s brain, 80% of the human brain, 71% of a camel’s brain but only 15% of a shrew’s.

While we could speculate about the previously unappreciated intelligence of some of these species, there’s probably nothing particularly special about a large-bodied species possessing a large neocortex as such. A big neocortex may not necessarily tell us anything about that animal’s social life.

Second, other ecological factors have been found to produce similarly strong correlations with brain or neocortex size in primates.

Various studies have shown that other factors can explain neocortex size equally as well as social group size. They include primate territory size, diet (especially fruit-eating and other kinds of extractive feeding behaviour), and other variables like nighttime versus daytime activity patterns.

In fact, so many strong statistical correlations have been found by researchers looking into this question that one study bleakly noted the “bewildering array of correlations between brain size and behavioural traits”.

All of this points to the fact that Dunbar’s theory is regarded by many experts as an incomplete explanation for the complexity of primate brains, cognition and behaviour.

One common factor among many of these aspects of primate ecology is that they all rely heavily on visual cues and the processing of visual information by the brain.

The larger neocortex of primates results to a considerable extent from a larger visual cortex (visual brain system), which clearly has many demands on it. Social behaviour is just one of them.

Primates seem to be unique among mammals in showing a strong evolutionary linkbetween an enlarging neocortex and a larger cerebellum, the brain region beneath the neocortex that processes and coordinates sensory and motor control and is involved in the learning of motor skills.

Focusing solely on the neocortex misses a big part of the picture of primate brain evolution.

Our human-centric view of the world

Another problem pointed out by other primatologists is that no matter how dispassionately we might study primate cognition, we will inevitably impose our own, species-centric view of the world on it.

This is the problem of anthropocentrism: our belief that humans are the most important species on the planet. We simply can’t escape making inferences through our own “socio-cognitive spectacles”, as pointed out by the philosopher Wittgenstein.

This problem becomes particularly acute with primates, which are our evolutionary cousins. It is easy for us to impose complexity on behaviours that may not be complex at all within primate (versus human) social settings.

Furthermore, when Dunbar’s number has been tested against the actual social organisation of historical and living hunter-gatherer groups, it has been found to be wanting.

The anthropologist Frank Marlowe, for example, has suggested that hunter-gatherers spend most of their time living in “local bands”, and that these typically comprise only around 30 people, regardless of where in the world they are living.

Dunbar, in responding to Marlowe, has pointed out that local bands are often unstable, and change in size regularly, making other (larger) units of social organisation more appropriate for investigation.

There is simply no agreement among researchers about which unit of human social organisation is the most appropriate one for studying evolution.

Many other criticisms have been levelled at Dunbar’s theory and show that it, and the predictions emerging from it about human social organisation, are widely regarded as overly simplistic.

While Professor Ehrlich correctly quoted the number 150 as Dunbar’s number, he didn’t quite present the whole picture. He could have been more accurate by linking the figure to its source and he overlooked the abundance of contradictory and highly critical published studies of Dunbar’s theory. – Darren Curnoe

The author has provided a good, critical assessment of Dunbar’s number and a useful discussion on the weaknesses of correlative comparative studies.

Dunbar’s number is an arresting idea with a pithy name, easy to digest and just counter-intuitive enough to have broad appeal, which may explain why the idea it encapsulates has caught on so readily outside of primatology and anthropology.

Despite the limitations and problems with Dunbar’s number and the idea that neocortex size seems adapted to living in social groups of fewer than 150 individuals, I believe Dunbar’s thinking remains useful.

In particular, I see value in Dunbar’s argument that at each level of closeness, we are limited in how many relationships we can have: an average of five intimate supportive relationships, 15 close friends and so on.

Whatever the neurobiological mechanisms, Dunbar has made useful predictions about the limited nature of human social capacity, and they remain to be thoroughly tested against competing ideas.

Paul Ehrlich quoted a piece of science that has become pop folklore, but that is also controversial.

However, the point he was making – that humans have limited social capacity and that our evolved social capacities don’t suit us well to living in societies of millions – has not been refuted.

I suggest that readers interested in this topic listen to Dunbar’s TED talk, especially the bit from about 7:20 in which he discusses the layered capacities for different types of relationship. – Rob Brooks

Darren Curnoe is an ARC Future Fellow at UNSW.

This article was first published in The Conversation