Anthony Blackshield and Richard Chisholm have been awarded UNSW’s highest honour in recognition of their contributions to the law. 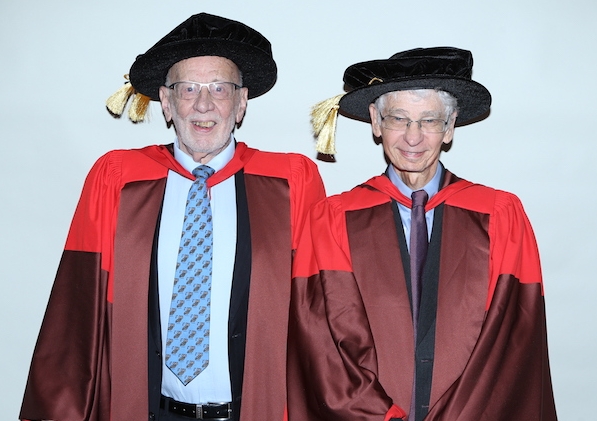 Emeritus Professor Anthony Blackshield AO and Professor Richard Chisholm AM have been awarded UNSW’s highest honour in recognition of their service to the law and legal education.

In a first for the school, the three founders of UNSW Law had requested their honorary degrees be awarded at the same ceremony. Professors Blackshield and Chisholm received their degree at the graduation ceremony on Wednesday. The Dean, Professor George Williams, conferred the degree on the late Emeritus Professor Michael Coper AO FAAL, the third founding member, on March 26 at the National Capital Private Hospital, Canberra.

At the graduation ceremony this week, Chancellor David Gonski AO noted all three academic leaders had made outstanding contributions to the life of UNSW, the academy and the community at large.

“For me, this is a unique experience to have sat in lecture theatres marvelling at these fantastic lecturers,” he said. “To then be given the honour, to give them the honour they deserve … it is an amazing experience for me.

“Michael may not be here today, but his spirit lives on in all of us who learnt from him.” 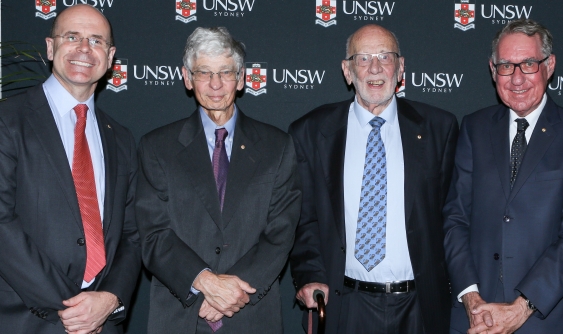 Professor Blackshield also paid homage to Michael Coper at Wednesday’s ceremony. In his address, he spoke of using the law for good to combat injustice and inequality.

“In the Law School, through the interaction of teachers and students, we were able to develop a real understanding of the creative possibilities of law as a means to an end. And all these years later, it has been wonderful to see that the ethos of the teaching staff in the Law School hasn’t really changed.”

Professor Blackshield is a Fellow of the Academy of Social Sciences in Australia and a Honorary Professor of the Indian Law Institute, New Delhi. He taught at UNSW Law school from 1971 to 1978, and was appointed an associate professor in 1974. He is a public commentator on legal and constitutional issues and is well known for his discourse on the dismissal of the Whitlam government and ‘the Murphy affair’.

In 2014, Professor Blackshield was appointed an Officer of the Order of Australia (AO) for distinguished service to the law as an academic and as an author and commentator.

Professor Chisholm was an academic at UNSW from 1970-1993, where he was an associate professor and, later, head of school.

“This extraordinary award makes me feel like a surfer coming home on a great wave,” he said. “But waves, like human beings, can’t exist in isolation. They need the support and companionship of others.

“UNSW Law School has carried on this tradition. So much of its good work is driven by ideas of social justice, responding to the needs of those who have gone out of their depth and those who have had to swim against the current.

“Thank you, Chancellor, for this astonishing award. It comes from a wonderful Law School which taught me a lot and provided the support, inspiration and friendship that I value today.”

Professor Chisholm is a member of the Australian Law Reform Commission's Family Law Review Advisory Committee. In the 1970s, he became a founding member of the Aboriginal Legal Service and president of the children’s rights group Action of Children. He was appointed a judge of the Family Court of Australia in 1993. Since retirement from the bench in 2004, he has worked on a number of projects, including The Family Courts Violence Review and, most recently, a report on information sharing between the family courts and child protection departments.

“Both played a crucial role in setting the Law School on a path of success, as reflected in the fact that less than 50 years later, UNSW Law School is ranked 14th in the world.

“Both also achieved extraordinary success after leaving UNSW Law in their respective fields of constitutional law and family law. It is fitting that they are being conferred with the highest honour that UNSW can bestow.”