Mimicking nature to power the future 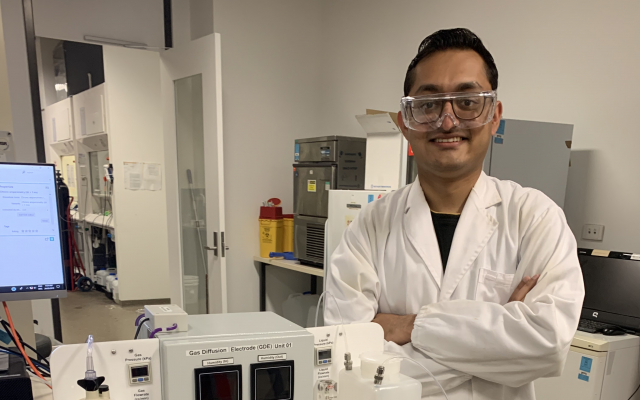 Drawing on the inspiration of photosynthesis, and how it powers life on Earth by converting sunlight into oxygen and glucose, Dr Rahman Daiyan is developing new metal-based catalysts that can convert waste carbon dioxide (CO₂) into fuel.

In this way he seeks to power the future energy needs of humankind, as well as eliminate CO₂ emissions in the atmosphere. You can imagine his to-do list: Solve the energy crisis. Tick. Solve the climate emergency. Tick.

Working in the Particles and Catalysis Research Laboratory (PartCat), under the  leadership of ARC Laureate Fellow, Professor Rose Amal, Daiyan says the chief motivating factor in his research is to stop catastrophic climate change.

“I have seen the impact of global warming first-hand. I’ve seen coral bleaching on the Great Barrier Reef and experienced flooding in my village home in rural Bangladesh from the rising seas. Climate change is a huge problem and I want very much to be involved in the solution,” he explains.

Surely there can be no greater solution than taking climate change’s villain, CO₂, and transforming it, using energy from renewable sources, into a high-value, carbon-neutral fuel.

According to Daiyan, there are many different fuels and products CO2 reduction reaction can generate. “We can produce alcohols such as ethanol, methanol and propanol. We can create formic acid, which is regularly used in pharmaceuticals and in textile industries. We can also convert CO2 to syngas, a mixture of carbon monoxide and hydrogen that can be used as building blocks to generate useful commercial chemicals….”

While the simplicity of the idea is beautiful, the execution is more challenging and requires multidisciplinary effort. Daiyan says his part of the puzzle involves passing waste CO₂ through a salt solution, dipping specially designed metal ‘leaves’ (called electrocatalysts) in the solution, then applying electricity sourced from renewable energy sources, such as solar and wind, to drive the catalysis.

Central to the practical implementation of his research is sourcing cheap and easy-to-access metals such as bronze, copper, tin, cobalt and nickel to use as the electrocatalysts. “Economically the idea won’t work if the metals used are too expensive,” continues Daiyan. “So, we only explored cheap materials that can be sourced in Australia.”

The project’s next steps are to continue refining the catalysts and convert the technology from the lab scale to the bulk scale. According to Daiyan and his colleague Scientia Fellow Dr. Xunyu Lu, commercialisation is definitely in the works and the team is exploring options with local Australian SMEs to pilot the technology and bridge the gap between the fundamental research and adoption by industry.

“One idea is that we will create a system that can be used in a large power or chemical plant to capture and use the waste CO₂ emissions. It can be tricky to get big companies to adopt new technology fast, so we envisage collaborating with an SME to set up a third-party installation at the company’s CO₂ exhaust(s). This will primarily be maintained and managed by the SME,” Daiyan says.

“Another long-term idea is scaling this type of system down to fit in our cars, so we can produce a useful fuel while we are driving along,” he says.

For Daiyan, one of the joys of the technology is that the system is small and modular and doesn’t require any particular temperature or pressure. “All it requires is an inlet for CO₂, and an electrolyte, such as salt, to dissolve the CO₂. Currently we are using fresh water in preparing electrolyte, but we have researchers working on the next goal which is to use seawater,” he says.

Although there are a few barriers to implementation at the moment, Daiyan says they can be eventually  solved, and once they are solved, they will be able to offer humanity a pollution-free carbon neutral energy system powered from renewables.