The power behind UNSW’s energy partnerships

CEO of UNSW’s Energy Institute, Justine Jarvinen, shows how her breadth of experience in the energy industry has helped her connect UNSW’s energy experts with important industry and government players.

Justine Jarvinen – or JJ as she is known to all – has come a long way since leaving school in Darwin with an ambition to one day work in the pharmaceutical industry. 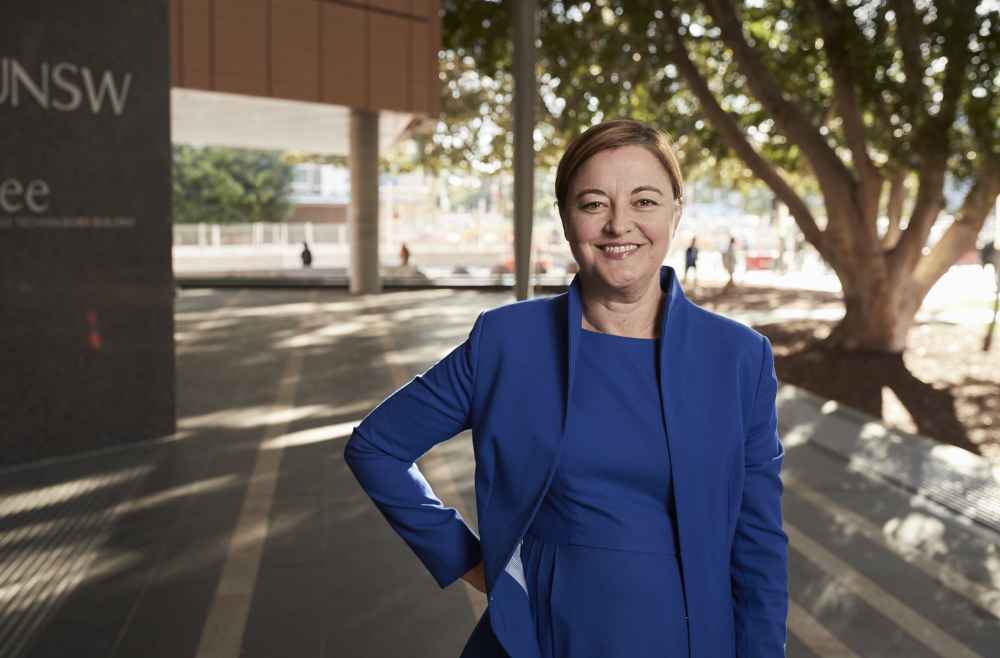 As it turned out, things didn’t quite pan out that way.

“I went into chemical engineering thinking I was going to do something in a lovely crisp, clean laboratory wearing a white coat and making very small-scale things in very exacting conditions,” JJ says.

“But there I was in my first job out of Uni in dirty overalls on an oil rig, out in the middle of the ocean for a week at a stretch.”

It wasn’t long after enrolling in chemical engineering at the University of Adelaide that JJ was inevitably drawn to the world of energy.

Since that first job on the oil rig, JJ has cut a remarkable career path in the energy industry that has included energy engineering, energy technology innovation, a stint as a financial analyst at a stockbroking firm, and working in philanthropy.

She has held executive roles at traditional energy players such as Exxon, Shell and AGL in a path that has criss-crossed the world, all the while deepening her interest and understanding in emerging energy technologies.

We’re in a position to make really wise, robust investment decisions and have a kind of vision that is going to fit with a future low-carbon electricity system system and create a pathway for both the energy and transport transition.

“So that whole idea of an energy value chain that covers an energy ‘systems of systems’ – that’s where my experience really comes into play.”

In 2017 she was head-hunted for the role of Chief Operating Officer for UNSW’s Energy Institute, upgraded to Chief Executive at the start of this year.

JJ says the role is a perfect fit with her experience and allows her to not only weave together all the knowledge and networks developed in years of being at the forefront of energy innovation, but to also use the very valuable skills she learned while working for a philanthropy investment organisation in the UK, New Philanthropy Capital.

“The experience in philanthropy taught me so much that I now use all the time,” she says

JJ sees her role overseeing UNSW’s Energy Institute as essentially being a conduit between the University and industry, government, philanthropists and other research organisations, and even between energy experts working within the University.

“I can speak a bit of each language that various academics in energy are fluent in,” JJ says.

“I’ve got enormous breadth, you could say I’m an inch deep and a mile wide. Whereas a lot of experts here have enormous depth but are much more specialised, and that's just a beautiful combination.

“Because if I can understand what they're doing well enough to connect up with the problems I've seen in industry or the things that governments are talking about or grappling with in terms of policy or regulations, then I can bring all those parties together to accelerate impact.”

JJ says the biggest challenge in her role is the fact that she’s only one person representing possibly the largest and most diverse assembly of energy research experts in Australia.

“Bandwidth is a big issue because I can't think of a bigger institution in Australia that has more energy expertise and facilities than UNSW and we’re only just starting to pitch that to the world,” she says.

“What I’m really doing is trying to reveal the research excellence that's hidden in plain sight to people and organisations outside this University.”

Looking ahead in the longer term, JJ suspects that UNSW can lead not only the transition to lower carbon energy, but the inevitable move from petrol guzzling vehicles to electric ones.

“I keep talking about things with an energy lens but at UNSW there is a terrific opportunity to create a nexus between our expertise in energy with that of transport.

“We have the fantastic transport institute run out of the Engineering faculty, the Research Centre for Integrated Transport Innovation (rCITI), and there’s also the Digital Grid Futures Institute looking at transitioning the electricity grid.

“So UNSW has got fantastic planning for transportation infrastructure and we've got a massive energy systems research group in electrical engineering; you bring the two of those together –  it must be one of the only organisations in the country that could do that –  to solve electrification of transportation.

“We’re in a position to make really wise, robust investment decisions and have a kind of vision that is going to fit with a future low-carbon electricity system and create a pathway for both the energy and transport transition.”