Today's disease names are less catchy, but also less likely to cause stigma

The official naming of COVID-19 has the tone of a committee decision. Historically, names for diseases have not been quite so well thought out and were more likely to offend.

What’s in a name? A lot when it comes to disease outbreaks, according to the recent communication from the World Health Organisation (WHO) on the previously named coronavirus. The virus will now be named severe acute respiratory syndrome coronavirus 2 (SARS-CoV-2), and the disease named COVID-19.

While it has been noted that picking a name might not seem the most pressing problem in the middle of an outbreak, WHO chief Tedros Adhanom Ghebreyesus laid out the important considerations behind it in his announcement. Guidelines recommend avoiding “references to a specific geographical location, animal species or group of people,” he said, adding these measures aimed to prevent stigma.

The WHO renaming hopes to stymie racism and framing of COVID-19 as “the Chinese virus”, that has come with reports of discrimation.

Unfortunately, there has not been a WHO pronouncement about inappropriate terminology to deflect the media from attaching the word “deadly” to whatever new virus is in their sights!

The new name is intended to represent a viral persona and the WHO correctly points to past experiences showing disease names can “stigmatise entire regions and ethnic groups”. When we look at the history of disease naming we can see plenty of unintended consequences, stigmatising or otherwise.

The ‘Great Pox’: an exercise in re-branding

In the 16th century “Pox” was a generic name for any frightening and unfamiliar health problem, particularly one that manifested with lesions on the human body. Pox (or “pocks” referring to the specific lesions) was a term often used interchangeably with “plague” as a population-terrifying word.

Both words came to carry a connotation of what or who the causes of the sickness might be. Less worthy people or “foreigners” were perennial favourites as the guilty parties in the case of the pox, while rats were usually added to the mix in the case of plague. Nobody was very concerned about stigmatising the rats.

Sexually transmitted disease syphilis was originally called The Great Pox and referred to as a “venereal” affliction (luckily, you can’t really stigmatise Venus). It was also named variously the French or Italian or English disease, depending on which of these newly designated states you were at war with or just wished to gratuitously insult.

Italian physician Girolamo Fracastorio (1484-1530) wrote a graphic poem about the disastrous physical effects of this disease on the young and beautiful. He named his “hero” Syphilis, thus providing another name for the contagion. 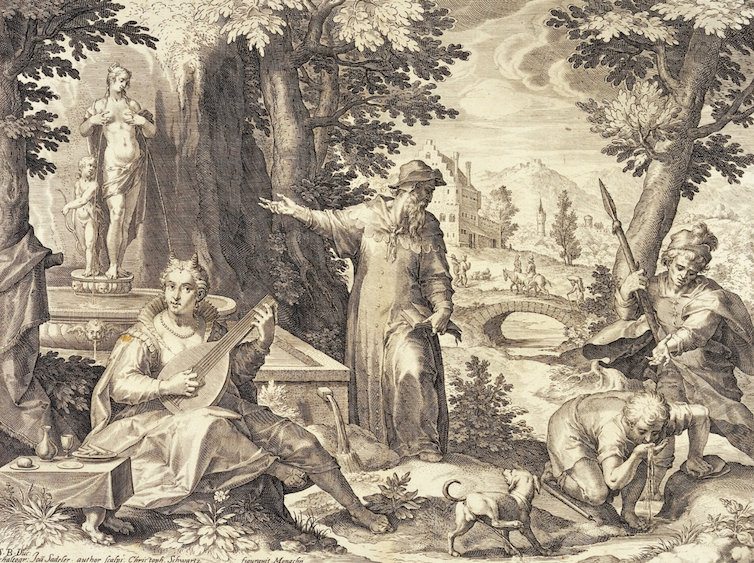 Hieronymus Fracastorius (Girolamo Fracastoro) shows the shepherd Syphilus and the hunter Ilceus a statue of Venus to warn them against the danger of infection. Wellcome Trust, CC BY

However, the use of the name “syphilis” for venereal disease was not common until the 19th century. By then it was no longer seen as a means to stigmatise attractive young men but rather as an acceptable name for a shameful social problem.

Those with long memories might acknowledge a year can be stigmatised by a disease just as easily as a geographic location. The year 1918 is associated with dread due to the outbreak of the Spanish Flu pandemic. Books have been published a century later with titles such as Pandemic 1918 and A Death Struck Year.

An interlude of enthusiastic microbe hunting in the early 20th century had the counter-intuitive result of young ambitious, university-trained bacteriologists enthusiastically competing to get their names attached to the “new” diseases.

Meanwhile in New York the “disease” usually depicted as the archetypal example of stigmatising, was about to make its first media appearance.

The term GRID (gay-related immune deficiency) was used initially as a name to try to make sense of young gay men presenting at doctors’ surgeries or Emergency Rooms with collections of symptoms not usually seen in Western countries.

This name was changed to AIDS (acquired immune deficiency syndrome) when it was realised not just gay men were affected by compromised immune symptoms. Indeed, the Grim Reaper television commercials of the 1980s warned us that everyone from babies to the elderly was now at risk of this terrifying disease, but the stigmatising associated with GRID remained and the acronym AIDS did not protect the gay community from blame and rejection.

The WHO has developed guidelines to now be careful in their naming. Gone is the fear-mongering against pork products with swine flu, first seen in Mexico in 2009; or people from Middle East, treated with suspicion after the naming of Middle East respiratory syndrome in 2012.

Avian influenza was originally named fowl plague in 1878, and when H5N1, or “bird flu” created major new outbreaks in 2004 and 2005 millions of birds were slaughtered – including many with no risk of carrying the disease.

Fear needs a name and naming suggests a response, but not always is the response acceptable to everyone.

Examining the past shows avoiding stigmatisation was not of primary importance in dealing with large outbreaks of disease. Rather, the search for scapegoats took precedence.

Now, in effect, a greater fear (of the worse effects of stigmatisation) is being used to combat and correct a medicalised fear. Can misinformation be minimised by the best non-stigmatisation efforts of the WHO? Only history will tell.