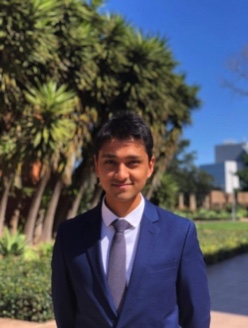 Aditya's award, which was conferred for the best student talk at the 43rd Australasian Combinatorics Conference (43ACC), was announced last Friday.

He won for his presentation, Existence of 2-factors in random uniform regular hypergraphs. The prize was won jointly with Monash University Honours student Jack Allsop.

Aditya's win is a particularly impressive achievement, as past winners have predominantly been at PhD level. He is also the first winner not just from UNSW Sydney, but from any institution across NSW.

Aditya is a Bachelor of Advanced Mathematics/Bachelor of Software Engineering Honours student who is supervised by Professor Catherine Greenhill in the School of Mathematics and Statistics.

43ACC was organised via the University of Melbourne, and was held online from 13-17 December 2021.

ACC is the annual conference of the Combinatorial Mathematics Society of Australasia. It covers all areas of combinatorics in mathematics and computer science.

A very big congratulations to Aditya!