The green hydrogen revolution is coming, and Australia is perfectly placed to take advantage of it, an analysis of production costs by UNSW engineers has shown.
Lachlan Gilbert | UNSW Newsroom 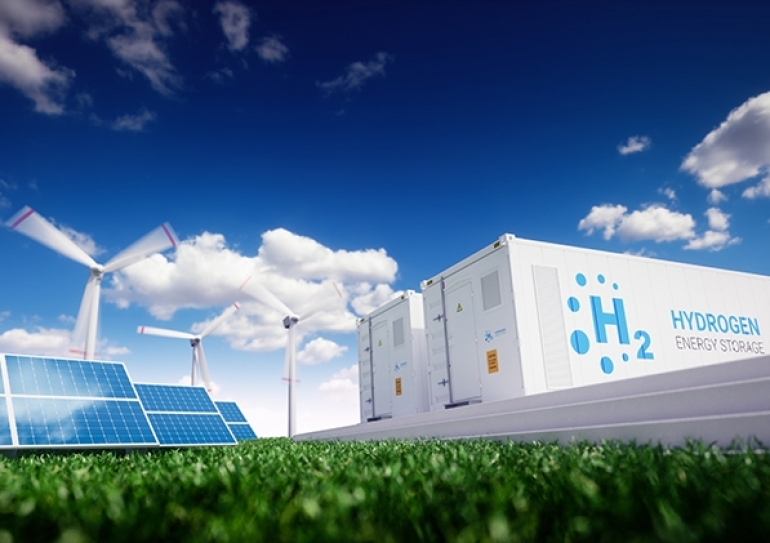 Green hydrogen is produced when water is split into hydrogen and oxygen through the process of electrolysis, which is powered by renewable energy like solar or wind. Picture: Shutterstock

Engineers from UNSW Sydney have crunched the numbers on green hydrogen production costs to reveal that Australia is in prime position to take advantage of the green hydrogen revolution, with its great solar resource and potential for export.

The researchers identified the key factors required to reduce the cost of green hydrogen to become competitive with other methods of producing hydrogen using fossil fuels.

In a paper published today in Cell Reports Physical Science, the authors show how different factors affect the cost of producing green hydrogen by electrolysis using a dedicated solar system and using no additional power from the grid.

Without using electricity from the grid, which is predominantly supplied by fossil fuel electricity, this method produces hydrogen with nearly zero emissions. Being free of the grid also means such a system could be deployed in remote locations with good, year-long exposure to sunlight.

The researchers examined a range of parameters that could affect the final price of green hydrogen energy including the cost of electrolyser and solar photovoltaic (PV) systems, electrolyser efficiency, available sunlight and the size of the installations.

In thousands of calculations using randomly ascribed values for various parameters in different scenarios, the researchers found the cost of green hydrogen ranged from $US2.89 to $US4.67 per kilogram ($AUD4.04 to $AUD6.53). It was possible to get even lower than this, the researchers said, with proposed scenarios approaching $US2.50 per kilogram ($AUD3.50), at which point green hydrogen starts to become competitive with fossil fuel production.

How do you make green hydrogen? Just add water

Hydrogen produced through electrolysis shows great promise as a clean energy source of the future.

Simply put, water (two hydrogen atoms and an oxygen atom) is pumped into an electrolyser which uses electricity to split away the valuable hydrogen gas (H2) to leave oxygen (O2) as a benign waste.

However, if the electrolyser is powered by electricity supplied from fossil fuels, then there are still greenhouse gas emissions arising from its production.

A much cleaner alternative has the electrolyser being powered by electricity generated locally by renewable energy, such as solar PV installations, or wind turbines. In these instances, the hydrogen is produced with nearly zero emissions, and is called “green hydrogen”.

Why a range of prices?

Co-author Nathan Chang, who is a postdoctoral fellow with UNSW’s School of Photovoltaic Renewable Energy Engineering, says a common problem when trying to estimate the costs of developing technology is that calculations are based on assumptions that may only apply to certain situations or circumstances. This makes the results less relevant for other locations and doesn’t take into account that technology performance and costs improve over time.

“But here, rather than getting a single calculated number, we get a range of possible numbers,” he says.

“And each particular answer is a combination of a lot of possible input parameters.”

“For example, we have recent data on the cost of PV systems in Australia, but we know that in some countries, they pay much more for their systems. We also have seen that PV costs are reducing each year. So we put cost values both lower and higher into the model to see what would happen to the cost of hydrogen.

“So after plugging all these different values into our algorithm and getting a range of prices of hydrogen energy, we then said, ‘Okay, so there were some cases where we got closer to that $US2 ($AUD2.80) per kilogram figure. What was it about those cases that got it down so low?’”

Co-author Dr Rahman Daiyan, of ARC Training Centre for Global Hydrogen Economy and UNSW’s School of Chemical Engineering, says that when they examined the cases where the cost per kilogram approached US$2, certain parameters stood out.

“Capital costs of electrolysers and their efficiencies still dictate the viability of renewable hydrogen,” he says.

“One crucial way we could further decrease costs would be to use cheap transition metal-based catalysts in electrolysers. Not only are they cheaper, but they can even outperform catalysts currently in commercial use.

“Studies like these will provide inspiration and targets for researchers working in catalyst development.”

It all adds up

The system and cost simulation model itself was built by undergraduate student Jonathon Yates, who got the opportunity to work on the project through UNSW’s Taste of Research scholarship program.

”We used real weather data and worked out the optimum size of the PV system for each location,” he says.

“We then saw how this would change the economics in different locations around the world where solar-powered electrolysis is being considered.

“We knew that each location that would install such a system would be different – requiring different sizes and having to wear different costs of components. Combining these with weather variations means that some locations will have lower cost potential than others, which can indicate an export opportunity.”

He points to the example of Japan which does not have a great solar resource and where the size of the systems may be limited.

“So there is potentially a significant cost difference when compared to the spacious outback regions of Australia, which have plenty of sunlight,” says Mr Yates.

The researchers say that it is not far-fetched to imagine large scale hydrogen energy plants becoming cheaper than fossil fuel ones in the next couple of decades.

“Because PV costs are reducing, it is changing the economics of solar hydrogen production,” says Dr Chang.

“In the past, the idea of a remote solar-driven electrolysis system was considered to be far too expensive. But the gap is reducing every year, and in some locations, there will be a cross-over point sooner rather than later.”

Dr Daiyan says: “With technology improvements in electrolyser efficiency, an expectation of lower costs of installing these types of systems, and governments and industry being willing to invest in larger systems to take advantage of economies of scale, this green technology is getting closer to being competitive with alternative fossil fuel production of hydrogen.”

Mr Yates says it is only a matter of time until green hydrogen becomes more economical than hydrogen produced from fossil fuel methods.

“When we recalculated the cost of hydrogen using other researchers’ projections of electrolyser and PV costs, it’s possible to see green hydrogen costs getting as low as US$2.20 per kg ($AUD3.08) by 2030, which is on par or cheaper than the cost of fossil-fuel produced hydrogen.

“As this happens, Australia, with its great solar resource, will be well placed to take advantage of this.”