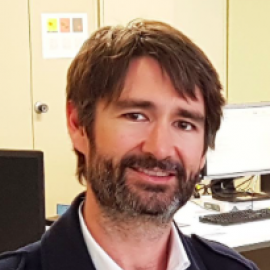 After completing a PhD at UNSW in 2000 Prof Manefield worked in Cambridge (UK), Copenhagen (Denmark), Kamaishi (Japan) and Oxford (UK) before returning to UNSW as a Senior Research Associate in the UNSW Centre for Marine BioInnovation (2004 to 2010). He took up an ARC FT2 Future Fellowship in the School of Biotechnology and Biomolecular Sciences (2011-2014) and spent another two years there on a convertible tenure track contract during which time he was awarded an August Wilhelm Scheer Visiting Professorship from the Technical University of Munich, Germany (2015). In 2017 Prof Manefield accepted his current position the UNSW Faculty of Engineering.

Prof Manefield trained as an environmental scientist with a major in microbiology. He has broad interests in environmental microbiology with an increasing focus on applications. Research highlights include the discovery of the first bacterial quorum sensing inhibitors, the development of RNA based stable isotope probing, development of experimental models of activated sludge floc formation, discovery of the world's first chloroform degrading bacterial culture and the discovery of isoprene respiring bacteria. He has published over 120 scientific articles, graduated over 15 PhD students, acquired over $20 million in research funding from government and industry sources, established a bioremediation company (Micronovo/Novorem). Prof Manefield is also a devoted science communicator interacting with all forms of media and government, industry and community groups and is the Founder of the Joint Academic Microbiology Seminars (JAMS Inc) in operation in Sydney since 2010 now with nodes across Australia and South East Asia. He teaches contaminated site remediation and water resource recovery and is actively involved with the Australasian Land and Groundwater Association.

For up to date information and news from Mike's team, visit www.manefield.com.