Sampling just a few genes can reveal not only the "lifestyle" of marine microbes but their entire environments, new research suggests. 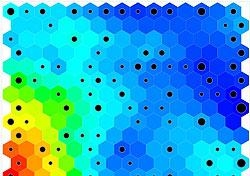 Sampling just a few genes can reveal not only the "lifestyle" of marine microbes but their entire environments, new research suggests.

The finding means researchers may be able to predict the types of microbes that thrive in specific marine environments by sampling the genomes of just a few dominant species, according to research co-author Rick Cavicchioli of the University of New South Wales. As well, it may reveal new insights into the impacts of climate change on biodiversity in the world's oceans.

"It's a bit like using the DNA from a single hair at a crime scene to discover the identity of the perpetrator," says Professor Cavicchioli. "What we've learned here is that a few genes can tell us much about the nature of the environment that species come from and what influences them to evolve in a specific way."

With other UNSW and US colleagues, Professor Cavicchioli compared the genomes of two common ocean bacteria that employ different strategies for living: one lives in nutrient-rich waters and is fast to grow and replicate itself, and another lives in nutrient-poor waters, and grows more slowly.

The findings are published in the Proceedings of the National Academy of Sciences.

Read the full story at the Faculty of Science newsroom.