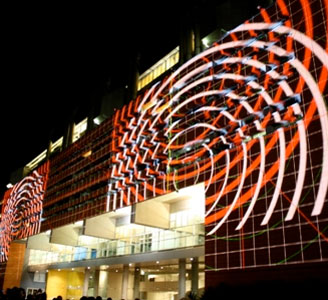 The exhibition title is 'Archetype' which refers to both arch (architectural) typologies and to Carl Jung's notion of archetype. The sculptures have been created from certain archetypal architectural shapes and forms – an Islamic pattern transformed into a cube, a sculpture inspired by the Gothic mushroom columns at Kings College, Cambridge, and many squares morphing into one square (a translation of sacred geometry) becoming columns that become a cathedral-like cube. He has attempted in these sculptures to take archetypal architectural forms then abstract and distill them to a certain iconographic and spiritual essence. For example, the Islamic Cube was developed by extruding an Islamic pattern from a 14th century mosque in Isfahan into 3D and then creating a cube from 12 bars. The interior chambers are dusted in crushed quartz crystals and the surface is painted in many layers of white acrylic mixed with marble dust and to give it the dusted, shimmering aura of spiritual icons. The sculptures are made from router-cut MDF, hand-cut wood and plastic.