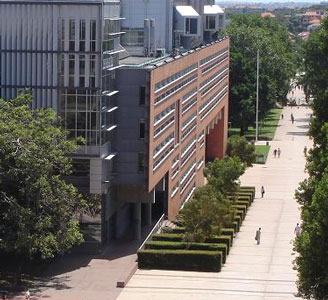 Radically redesigned train stations, mobile art galleries in the Domain and an agricultural precinct at White Bay are among new ideas for Sydney explored by young architects in a new exhibition opening this week.

Graduates from the Master of Architecture program in the Faculty of the Built Environment have worked with some of Australia’s leading architects on final year projects which address the challenge of making Sydney more liveable.

The exhibition, revision09, opens in Sydney this Friday.

Among the projects is Livee Tan's reconceptualised Wynyard station, a design that revitalises the underused Wynyard Park on York St by converting it into an open park. The park flows into an underground station concourse, integrating the station precinct with the surrounding city.

Ian Robertson used computer modelling to identify pedestrian paths through the Domain and then created a concept of mobile art exhibition galleries that could be placed in the “dead zones” where people usually do not go.

Addressing sustainability concerns and the erosion of Sydney basin farmland by expanding development, graduate Gilo Holtzman has created an “agricultural precinct” concept in White Bay – a development where houses and buildings become fertile ground for hydroponic vegetables and aquaculture.

Director of the Master of Architecture Program in Built Environment, Professor Xing Ruan, said using Sydney as the “laboratory” for the graduates’ projects had posed a challenge to deliver final projects that were both inspiring and realistic.

“Like any social democratic system in a Western city, architectural interventions in Sydney have to be negotiated with myriad forces of pulls and pushes, be they economic or political, Professor Ruan said.

The city thus provides a tremendously charged confinement for a piece of architectural work to be judged as either genuine or phony.

Any genuine attempt to make good architecture in a highly charged urban context has no other option but to address the universality of human inhabitation, which is largely independent of any idiosyncratic self-obsession of an architect. The phony is the opposite.

Revision09 opens at CarriageWorks in Eveleigh, on Friday, 20 November at 6pm, with a preceding seminar by Marco Frascari, Dean of the Azrieli School of Architecture and Urbanism at Canada's University of Carleton at 4.30pm.