Study to be the best by the best at the UNSW 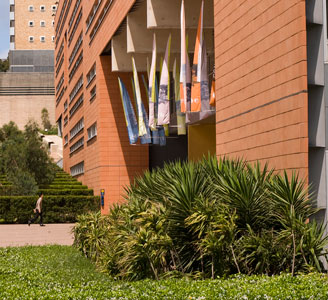 Leading industry practitioners and professors who teach at the UNSW Built Environment have recently been awarded some of the State's most eminent architecture prizes within Australia.

From commercial architecture, to heritage, interior architecture and sustainable architecture, projects skillfully blending these elements took out many of the top honours presented at the Institute's annual awards ceremony in Sydney on Friday 18 June.

Professor Ken Maher from UNSW Built Environment and Chairman of HASSELL led the team that was awarded the State's top public architecture prize, the Sulman Award, for the Epping to Chatswood Rail Link project. Presenting the award, the jury said: The four stations that make up the Epping to Chatswood Rail Link set a new benchmark for transport design in Australia. They are an elegant and innovative integration of engineering and architecture, where technical challenges and complexities have inspired rather than constrained the outcome. While the station planning is highly rational and easy for all users to understand, the spatial experience is rich and exciting.

Tzannes Associates led by the Faculty Dean, Professor Alec Tzannes, also took out the Wilkinson Award, a major residential architecture award for new houses or alternations and additions, for the Bilgola Residence on Sydney's northern beaches. This marks the fourth Wilkinson Award for the Professor - an honour only rivaled by legendary architects Harry Seidler (four Wilkinson Awards) and Glenn Murcutt (five Wilkinson Awards). The jury said: The house is composed predominantly of concrete, glass and steel, and is remarkably sober and robust. The concrete, in particular, is used with great finesse to achieve a thoroughly convincing, honest and high quality expression, well suited to its domestic context. The use of timber paneling and softer furnishings internally completes a well considered hierarchical attitude to interior and exterior domestic space. Although the plan and materials are minimal and direct, the jury was very impressed by the subtlety derived from the architect's restraint and the avoidance of extravagance.

A public architecture award was also presented to the Surry Hills Library and Community Centre by Francis-Jones Morehen Thorp (fjmt), which emerged as this year's most honoured project - also taking out the Milo Dunphy Award for Sustainable Architecture and the John Verge Award for Interior Architecture. Richard Francis Jones is one of the Faculty Visiting Professors and a frequent member of design studio review panels.

The jury said: The Surry Hills Library and Community Centre delivers a wide range of services including a community library, childcare centre, and meeting spaces over four floors on a modest footprint. Overall, the building presents as a finely crafted piece of joinery, magnified to sit comfortably within the scale of the public domain. The jury was impressed with the project's commitment to sustainability and the elegant way many of the initiatives have been integrated from first principles into the building form and its operation. They added: Surry Hills Library and Community Centre is a confident and considered piece of civic architecture. The building has been warmly embraced by the local community, and the client and the architect are to be commended for their commitment to delivering an exemplary outcome that eschews conventional notions of contemporary public architecture for local communities.

Durbach Block Architects were awarded the Sir Arthur G. Stephenson for Commercial Architecture, with the jury describing the design as a a poetic sculptural element that gathers and unifies the building's surroundings, creating an apparently new space drawn in around itself, and giving dignity to the small pocket park in which it now appears to sit. They said the building sits easily in its place and recognises the architectural traits of its neighbours, adding that from anywhere in this pocket of Kings Cross you can feel the presence of this building, how it occupies the precinct, and how it reacts to changing light. What by day appears a solid building with punched openings formed by casually misaligned windows, at dusk becomes a moulded, ephemeral container of light. Neil Durbach is also a Visiting Professor and often conducts studios in the Master of Architecture program.