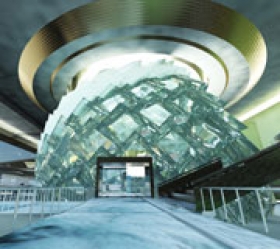 Designs from UNSW interior architecture students could form the heart of the proposed cultural centre under the Barangaroo headland.

A national Indigenous museum and a performing arts centre modeled on the headland are just two ideas from UNSW for the centre.

The work of the final year Interior Architecture students is on display at UNSW’s Red Centre as part of the Faculty of the Built Environment contribution to the Sydney Architecture Festival.

The design concepts are also being handed over to the Barangaroo Delivery Authority to generate ideas. The Authority plans to use the images on its website and in its foyer.

“The cultural centre will be in a sense the reverse of the Opera House,” says Dr Russell Rodrigo, the head of Interior Architecture. “It will have the same iconic status, but it’s an interior only.”

A-Yun Han’s vision for an Indigenous museum centres on a series of glass domes inspired by traditional huts which were used by locals at the time of settlement.

“There are small Indigenous museums, but they don’t attract a lot of interest locally,” she says. “This would encompass both the history of Indigenous people from settlement until now and there would also be artwork.”

Jon Derrin used computer technology to model a Sydney headland and then used that motif, in white, to design a contemporary performing arts centre.

“There would be room for a large theatre and a music venue, each of which would seat up to 1,000 people.

“We don’t have anything this size which is dedicated to contemporary performance in the city,” he said.