Two UNSW-developed technologies have been recognised with Collaborative Innovation Awards at the Cooperative Research Centres Association conference in Adelaide this week. 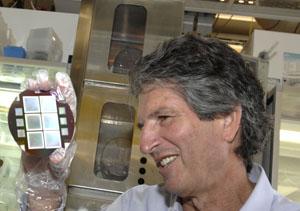 Two UNSW-developed technologies have been recognised with Collaborative Innovation Awards at the Cooperative Research Centres Association conference in Adelaide this week.

Low-cost Pluto solar cells with record-setting efficiency and ‘green’ steel, which uses recycled rubber car tyres and plastics rather than fossil fuels in the steel-making process, were among five winning technologies.

Scientia Professor Veena Sahajwalla developed and patented the ‘green’ steel process, and then forged a partnership with the Australian steel manufacturer OneSteel.

In the five years since the commerical licencing agreement was signed, the technology has seen more than one million tyres diverted from landfills for use in more sustainable steel production.

“I wanted to capture industrial waste streams and recycle the huge volumes of waste we send to landfill back into industrial processing, and reduce emissions along the way,” says Sahajwalla.

Scientia Professors Stuart Wenham and Martin Green at the ARC Photovoltaics Centre of Excellence at UNSW developed the Pluto technology in close collaboration with Suntech, the world’s largest solar cell manufacturer, with funding from the Australian Solar Institute.

The Pluto technology is based on the UNSW-developed PERL cell, which in 2008 set the world-record for performance with 25 per cent efficiency.

The Pluto cell derivative is more economically viable to produce on a large scale, and recently surpassed the 20 per cent efficiency barrier for converting the sun’s radiation into electricity, setting a new benchmark for low-cost, mass produced silicon solar cells.

The cell features a unique texturing process that improves sunlight absorption, even in conditions of low and indirect light, which enables higher efficiency.

“We recently broke through the 20 per cent target for solar cell efficiency, which many experts thought was impossible and we’ve significantly lowered the costs compared to other technologies,” says Green. “We believe Pluto technology has struck the ideal balance between conversion efficiency and manufacturing costs to create a truly viable alternative for electricity production.”

“As we continue to refine the Pluto technology and push up the conversion efficiency, we have no doubt that it will capture an increasing share of the global solar market,” says Professor Wenham, who noted the importance of the partnership with Suntech, which allowed the cell to move beyond a lab-scale device and become a commercial reality.

Dr Richard Corkish, who heads the School of Photovoltaic and Renewable Energy Engineering at UNSW, says Australia is in a unique position to capitalise on its expertise in solar photovoltaics, and could become a type of solar energy ‘Silicon Valley’ for research and development.

“Australia is at the ends of the Earth geographically – so you have to be really special to be at the centre of something from here, and we have that special status,” he says.