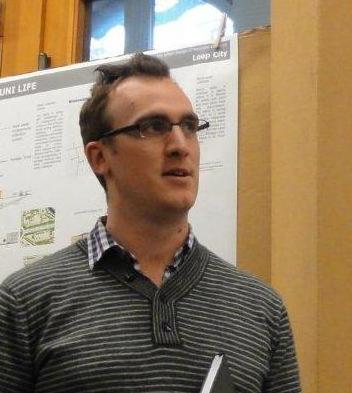 Recent graduate David Hunter (MUDD 2012) from the Albury-Wodonga region has returned to the border to help plan the further expansion of Albury and Wodonga and the North East Victorian region.

David has rejoined the staff of Habitat Planning with the dual qualifications of town planning and urban design. He was recently acknowledged as a top performing MUDD student receiving the Commissioner Hoffman Urban Design Award for his efforts.    David originally worked for Habitat in Albury after leaving school and whilst studying for his primary degree in town planning from the University of New England.

David was amongst 18 students who visited Berlin for three weeks to look at a modernist style TU Berlin university campus built in the 1950s in the old West Berlin and come up with a study for an eco-type redevelopment.

David chose to return to the area with his wife Natasha and his new son Oliver to be closer to family members. “It is a great place to bring up a family and all my family are here”.

David recently featured in a newspaper article titled “Town planner in familiar Habitat” in the business section of the Border Mail.