BE success at CAPITheticAL Competition in Canberra 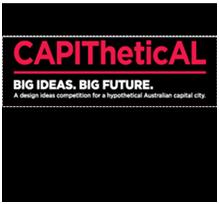 We are pleased to report that last night in Canberra, two teams of BE Masters students were announced as finalists in stage one of the CAPITheticAL Big Ideas, Big Future international competition – one team from the Master of Architecture Program led by Dr Paola Favaro, and one team from the Master of Urban Development & Design Program led by Scott Hawken and Professor James Weirick.

CAPITheticAL is a design ideas competition for a hypothetical Australian capital city. In the centenary year of Canberra, the competition honours the vision of Walter Burley Griffin’s original plan for the capital city of Australia. The competition drew 114 entries from 24 countries. Shortlisted entrants will proceed to stage 2 of the competition to compete for more than $100,000 worth of prizes.

The MArch student team believes that an aspiration for a model capital city, such as Canberra, is to be the creator of a forum for the study of the 21st century city at a local, national and international scale. A great capital city can be seen as a forum for:

The Studio focused on the creation of ‘good city form’ within the low-density environments of Canberra. The team believes that a great Capital City promotes shared values, facilitates civil society, and inspires the national imagination. As these values change the urban form of the city must adapt and be inhabited in new and creative ways. The MUDD entry included the following statement:

We offer a critique of the CAPITheticAL brief to hypothetically relocate Canberra. We suggest searching for the ideas of tomorrow in the plans of yesterday. By refusing to reject the past we can embrace and improve upon what has happened in the city over the last 100 years . . . . There is rich cultural heritage embodied within the urban landscape. Great quantities of untapped social, material, and natural capital speak to the value of renewing, not abandoning, Canberra’s urban form.

This competition was held with a number of Centenary objectives in mind: exploring the history of the capital in fresh, imaginative ways; ensuring the Centenary is noted and celebrated not only by Canberrans, but throughout the nation and the world; and, underscoring the confidence of the Canberra community in critical appraisal of the city as it makes important decisions about the next one hundred years.

‘An intelligent but playful exercise like this is an ideal way to achieve recognition, draw attention to the unique design history of our capital, and to stimulate thought around nation-building.’

We congratulate the BE teams and staff members Dr Paola Favaro, Scott Hawken and Professor James Weirick on their success so far and wish them the best of luck in the next stage of the competition. We will keep you informed of their progress!

Three of our recent graduates, Tony Lam, Vahid Tehrani and Liam Filsom (MArch) were also successful in Stage 1 of the CAPITheticAL Competition – so overall, UNSW BE made 3 of the 20 shortlisted entries!