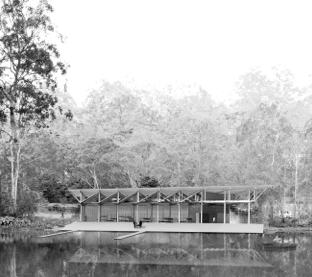 Sponsored by Harry Partridge Partners, the award aims to raise the awareness of structure in architecture and to foster closer engineer and architect collaboration. It is awarded to the design project which best demonstrates a harmonious dialogue between structure, and the form and function of the architecture. Mitchell’s Lane Cove Boatshed project with its innovative and creative reinterpretation of a vierendeel truss system illustrates a sophisticated understanding of the mutuality of architecture and structure. Mitchell’s project was guided by Architecture Program course convener John Carrick with tutorial assistance from Christian Grennan.

The jury for the prize was:

The intent of the competition is to ‘’contribute to the research of a system of development in the building sector, which represents one of the fields of human activity with the greatest impact on the environment, that is more sustainable than our current model, which has lead to a state of deterioration and pollution, bringing us to the verge of a global crisis of the Earth’s entire ecological system’’.