Para-cyclist and mechanical engineering student Alexandra Green has been selected for the London Paralympics team. 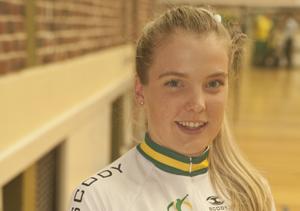 Para-cyclist and mechanical engineering student Alexandra Green has been selected for the London Paralympics team.

A world champion, Green will attend her first Paralympic games as part of a 15-strong cycling team.

"I am so proud to be selected as part of the Australian team heading to London. I am one step closer to my dream of getting a Paralympic gold medal and could not have done it without the support of the University and UNSW Sport and Recreation. I know that when I compete in the green and gold I will have so many supporters back home and that makes me really happy.

"I am living my dream," says Green, who is currently in Spain competing with the Australian para-cycling road team in the build-up to the games.

Green switched to cycling in 2010, after much success in competitive rowing. She holds a Ben Lexcen scholarship and in 2009 she was named UNSW Female Athlete of the Year.

The London Paralympic Games run from August 29 to September 9, 2012