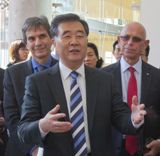 On June 7th The Party Secretary, Guangdong Province, Wang Yang and his delegation visited UNSW. Hosted by the Vice Chancellor, the purpose of the visit was to develop further cooperation between UNSW and Universities in Guangdong Province and to promote solar energy research in which UNSW is number one in the world.

The day began with a tour of the Photovoltaic Research Centre, led by Associate Professor Alistair Sproul and a visit to the roof of the Tyree Energy and Technology Building to view the installed solar panels.

Whilst touring the facilities of the university the Vice Chancellor and the delegation happened to pass by the MUDD Studio1 Design Jury in the BE Gallery. They made a visit to the studio, engaging with the class and chatting with some of MUDD Chinese students and Professor James Werrick.

Their tour of the TETB was followed by a roundtable discussion, led by the Vice Chancellor and the Party Secretary around strengths of UNSW and how we can assist Guangdong province in their quest to use greener technologies in all new developments. The delegates were at UNSW for just over an hour and UNSW was the only university in New South Wales which was visited by the Party Secretary. He is a key political figure and considered to be the 6th most powerful politician in PRC. UNSW was very fortunate to be able to host the Party Secretary and it proved a great opportunity for those on the MUDD program to showcase their work.