BE student's success at Sculpture by the Sea 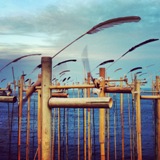 Master of Architecture student, Jed Long, was involved in the creation of one of the Sculpture by the Sea winning designs, Mengenang.

Jed is a member of design collaborative Cave Urban who have received notable success at this year's exhibition, being awarded both the Waverly Council Mayor's Prize 2012 & People’s Choice Prize.

We asked Jed for his thoughts on the groups achievements:

Jed Long; “We were all amazed at the end result, we started out with this initial idea and it grew and grew from them, more than anything though we are just overwhelmed and humbled by the public support.”’

The Mengenang sculpture is a tribute to Bali bombing victims and featured a symbolic 222 bamboo poles. Each pole was adorned with a rotator that sang when moved by the wind.

It is reported that nearly half a million people visited Sculpture by the Sea, the world’s largest free sculpture exhibition. Since beginning in 1997 the event has become increasingly popular and this vibrant and creative event is becoming a cherished annual event. We offer our warm congratulations to Jed and all the Cave Urban team for their great achievement.

To find out more about Mengenang the Cave Urban team visit their website: http://www.caveurban.com/

If you didn’t get a chance to visit the exhibition here's some great footage showing the sculpture and its picturesque location.