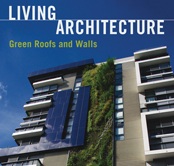 Built Environment students had a number of summer electives to enrol in this year, including a new one on green roofs and green walls. Creating green roofs and green walls is an increasingly popular project type in new urban development. Combining science and art in response to climate change, ‘living architecture’ reduces energy requirements of buildings, reduces the urban heat island effect and decreases urban stormwater runoff. By contributing to the functionality and aesthetics of the urban built environment, green roofs and walls also deliver positive benefits to public health and well-being.

Delivered over a two-week intensive period in early January, the course was taught by Graeme Hopkins and Christine Goodwin, principals of Fifth Creek Studio in Adelaide. Graeme and Christine area internationally recognised experts and co-authors of Living Architecture; Green Roofs and Walls (http://www.publish.csiro.au/pid/6494.htm) published by CSIRO in 2011. Graeme is also aBArch alum of UNSW.

The course introduced students to the range of feasibility, planning and urban design issues related to the design and implementation of what Graeme calls ‘living architecture’.  In these projects, the built environment of the city becomes a platform for developing design skills and knowledge in a holistic sense, including the design of integrated technical and natural systems with buildings and urban infrastructure.

It was the first time such a course was offered, and according to Graeme is unlike any other course that he is aware of. The course gave students the opportunity to apply theory to one of two City of Sydney sites: the Goulburn Street Carpark or the new Bicycle Hub at Taylor Square. They were also introduced to the research that Fifth Creek Studio has been undertaking to monitor the impacts of green roof and green wall projects, and to develop new systems for installing these elements.

Throughout the two weeks, students heard presentations from Lucy Sharman, City of Sydney’s Senior Projects Officer for Green Roofs and Walls; Matthew Dillon, President of Green Roofs Australasia; and Guido Den Teuling from the Green Building Council of Australia, as well as several suppliers of the plants and construction materials used in green roof/green wall projects.

The final day of the elective was Friday, 18 January when the temperatures in Sydney topped 45oC, providing a very real reminder of the need for built environment professionals to understand the implications of climate change and design to anticipate and ameliorate these potential conditions.