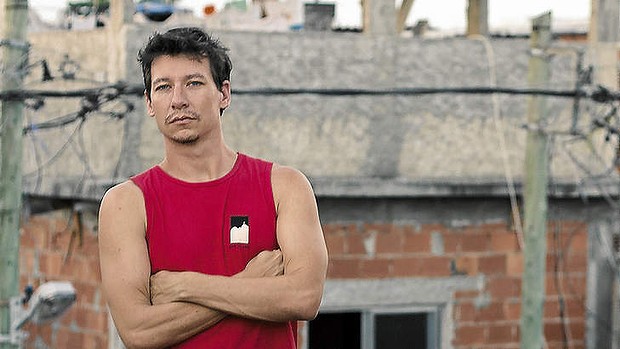 In 2010 BE alumnus Sam Faigen (BArchSt 2008, MArch 2009) went to work for Catalytic Communities (CC), a not-for-profit advocacy group based in Rio de Janeiro dedicated to destigmatising favela communities and integrating them into the wider society.  He wanted to study the city’s urban development and through CC, he helped set up the reporting website Rio on Watch to bring visibility to favela community voices in the lead-up to the 2016 Olympics.

Sam also created the Rio Underbelly website to publish a collection of stories about his two years in Rio de Jainero; and set up the RIOTmediaLab - a multimedia production laboratory involving commercial projects and non-profit initiatives focused on social development in Brazil.

Last year, journalist Frank Robson travelled to Rio to meet with Sam and learn more about his experiences and the challenges faced by the city.

Sam lived briefly in a conventional Ipanema apartment near the Cantagalo favela. He wrote articles and shot video for the CC website about human-rights violations during police takeovers of key shanty towns needed for the construction of Olympic infrastructure, or earmarked for private-sector redevelopment. In the rush to secure such multimillion-dollar sites, the entitlements of long-term residents were often ignored. "Some communities were being destroyed almost overnight," he says. "People were being turned out of their homes, robbed, threatened, intimidated and lied to by the government. It was heartbreaking to watch."

At that stage, Sam had friends on both sides of Rio's notoriously skewed socio-economic divide. He decided the best way to learn more about life at the bottom of Rio's food chain was to experience it. Leaving CC, he moved into a small flat inside Cantagalo (home to about 6000 people) and got a job working for one of the many favela residents who run stalls on Ipanema Beach, renting out umbrellas and selling snacks and drinks to tourists.

Sam saw the reality of communities controlled by the Pacifying Police Unit (UPP), a government sanctioned law enforcement and social services program - part of an on-going process in which military police are wresting control of Rio's teeming slum communities from drug gangs, then installing UPP bases to maintain order for the good of the people. At least, that's the official line. But human-rights activists identify a less benevolent agenda, suggesting the long-neglected favelas, spawned by fugitive slaves and now home to about a fifth of the city's six million residents, have become part of a cynical land grab by the same corruption-plagued authorities that ignored their plight over generations.

Sam saw himself getting too close to the local gangs and was worn out, he confesses, by the constant "wanting", and felt humiliated by the realisation that no matter how many friends he made, he would always be seen as a soft-touch gringo. Sam returned to Sydney soon after meeting Frank Robson and is writing a book about his experiences. In the process, he says he came to realise that the "gringo factor" wasn't the main reason he decided to leave Cantagalo. "The more profound reason was the choice that loomed in front of me: rich or poor. My apartment, best friends, girlfriend, surrogate family and job were all in the favela [and] I could see the First World receding at an accelerating rate. It was exactly because I was losing my status as a gringo that I had to get out. I did not want to lose myself to that world."