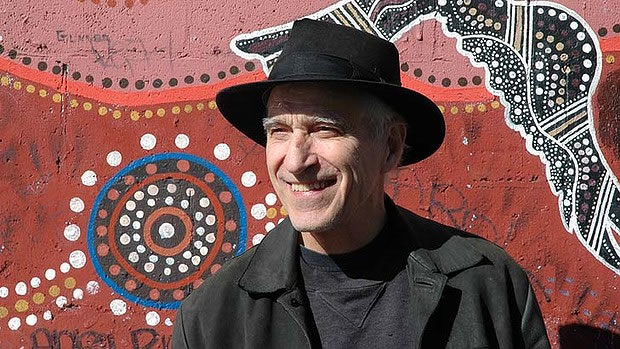 It is with great sadness we announce the passing of our alumnus Colin James.  Col James was a giant who took great strides with gentle steps, followed a career-long path with clear direction and purpose, but always had time for a cup of tea and to listen to those seldom heard by the architectural world he loved.

This giant used the skills and endurance of a boxer to transform the idea of ''house'' from a design object into ''housing'', the actions that over time enrich people's lives. In his own words, he ''made housing a verb'' for his anonymous clients, those people unserved by the benefits of a wealthy society.

Here was a giant who taught generations of students by using the University of Sydney design studio to work in the community for co-operatives, Aboriginal organisations and the homeless.  He built and occupied an autonomous house on campus.

Colin Leslie James was born in the town of Walcha on July 18, 1936, the son of Arthur James, a manager with the Bank of NSW, and his wife, Estelle (nee Ferguson), and this link to the country continued to be an important part of the urban man.

After high school at The King's School in Parramatta, Colin studied architecture part-time at Sydney Technical College and then at UNSW, where he was president of the Architecture Club and won a boxing blue. After graduating, he worked with the large practice of Stephenson and Turner under Sir Arthur Stephenson and Donald Turner.

Then, in the British journal Architectural Design, Col read about the Team 10 Primer and breakaway European architects including Aldo Van Eyck and Jacob Bakema from Holland, who complained that architects had sold out to the rich and ignored the bulk of society living in derelict and poor housing. ''Turn on the lights,'' Van Eyck said. ''Regard the anonymous clients,'' Bakema said.

Fired by these words, Col won a Stephenson and Turner scholarship to study at Harvard and ended up in Bakema's studio. He later worked with the Architects Collaborative under Walter Gropius.

On returning to Sydney, Col continued working with Stephenson and Turner on schools and aged-person settlements for the Salvation Army. He was living in Redfern and set up Archanon, a collaborative dedicated to the anonymous client.

There was no shortage of potential clients in Redfern, where many Aboriginal organisations needed help.  Col worked with Father Ted Kennedy, Mum Shirl, Dick Blair, and Bob and Kaye Bellear on grassroots community services, including the Aboriginal Medical Service, Aboriginal Legal Service, black theatre, refuges and markets, and the housing for The Block with the Aboriginal Housing Company.

Col completed further study in town and country planning at USyd under Professor Denis Winston. The course precepts - ''serve your client and community equally'' and planning based on public good - were obvious in his work.

Resident action was in Col's DNA, and he joined the Builders Labourers Federation, working with Jack Mundey and Joe Owens as an independent adviser on the Green Bans. He was appointed by Whitlam government minister Tom Uren as a resident advocate for the development of Woolloomooloo under the Federal Department of Urban and Regional Development initiatives.

In the 1970s, Professor Peter Johnson offered Col a teaching position with the Architecture Faculty at the University of Sydney. He worked with a range of tutors, lecturers and students who were linked by their passion and optimism.

Almost immediately, students from the USyd and UNSW combined on a project to recycle the almost deserted town of Nimbin in northern NSW. In Col's words: ''This proved to be a resounding success for decentralised living in cheap former dairy lands, building simple houses, making babies and promoting 'lifestyle' as a progressive occupation and an 'industry'.''

From this work, Col was asked by the NSW government to develop a multiple-occupancy policy. Later, he led a group of students to produce Low Cost Country Home Building, a self-help book for people wanting to build simple houses in rural areas.

In the late 1970s, Col's life-long interest in housing led to further study at the Architectural Association in London with Hugo Hinsley. On his return to Australia, he launched the housing studies program at the University of Sydney, and later become director of the Ian Buchan Fell Housing Research Centre, with the support of Vic Spencer, Peter Webber and Susan Clarke.  Col made sure the centre served those in most need of basic housing. In 2001, he received the NSW Architects Registration Board's Byera Hadley Travelling Scholarship to study the use of vacant buildings by the homeless in Britain and Europe. On returning to Australia, he worked with developers, the construction industry, government officials and architects to create CRASH (Construction industry Relief and Assistance for the Single Homeless).

Col was seconded from the university to the NSW Department of Housing in 1987 to head a team implementing the Homes on Aboriginal Land program in NSW. This led to further work in Redfern for the Aboriginal Health and Medical Research Council, Boomalli Artists Co-operative and the Bangarra Dance Group.

His recent work involved a feasibility study for a College of the Spirit for the Tharawal Local Aboriginal Land Council. This pioneering work involved 20 architecture students and 1000 Land Council members, and suggested new directions for the care, restoration and management of land, and educational initiatives.

Col would have been embarrassed by these words cataloguing his work. Likewise at any mention of all the unsolicited awards he received - a Member of the Order of Australia, a life fellow of the Australian Institute of Architects, the University of Sydney Alumni Award for Community Service, a life member of Shelter, the Australian Housing Institute's Lifetime Achievement Award, and many, many more. He learnt from history, but he was not keen on looking back. There was simply too much ahead, too many projects to work on, and too many opportunities to build change.

Gary Mallard wrote recently: ''Col James was the essence of intellect, integrity, tolerance and sincerity carried with a quiet dignity that sometimes had a sting in its tail. He was living proof that sometimes the good guys wear the black hats.''

In recent times, as his powers of memory declined, this essence of his character was unchanged. As Col roamed the corridors of the architecture faculty he loved, intent on completing some forgotten but urgent task, staff member Glen Hill reflected: ''During that period he spent a lot of time in the faculty, sometimes disoriented, but sometimes lucid. Regardless, to the end he was absolutely committed to his causes. As an academic he was tireless in his pursuit of justice and equity for society and the environment. He never lost that commitment.''

He delighted in sitting with family around the dinner table, savouring the taste of octopus, sharing cups of tea, laughing at silly stories in an odd south coast restaurant until his sides ached, and making trips up the Hawkesbury River to the family river refuge, Gentleman's Halt.

Colin James is survived by his partner, Karine Shellshear, and their daughter, Zoe.

Article and image from SMH: http://www.smh.com.au/national/obituaries/giant-architect-built-for-justice-20130222-2ewqq.html#ixzz2MEfhsZG7