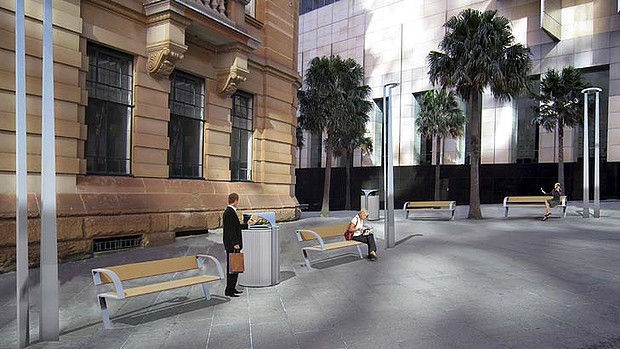 A distinctly Sydney style of sitting, seeing by night and tethering your dog will soon take shape on city streets.

A ''more relaxed and casual'' suite of street furniture - including street lights, benches, bins and bubblers - could be rolled out as soon as the end of the year in a bid to better stitch the city together.

The designs, which rely on a simple metal folded plate to articulate the arc of a bollard, the roof of a bin or the arm rest of a bench, also offer a glimpse into the design details that will link projects such as George Street light rail, Barangaroo, Green Square and the new Darling Harbour.

Tzannes Associates and Australian Built Urban Designs, which won the City of Sydney tender, are expected to deliver more than a million dollars' worth of furniture for those redevelopments over the three-year contract.

''Public domain furniture might seem small but at the scale of a city when you have co-ordinated furniture and elements it helps connect the city,'' she said.

The models will also eventually replace much of the JCDecaux furniture designed in 1997, as well as the various styles the city inherited in areas previously part of South Sydney or Leichhardt councils.

''It's a long-term strategy to complete the jigsaw puzzle; it's not something that would happen overnight,'' Ms Smyth said.

The bronzed aluminium, stainless steel and timber of the locally made range is intended to complement street furniture it may sit alongside, as well as the city's palette of sandstone and steel.

''It's not trying to make a big design statement, it is trying to respond to the context of the city,'' she said.

''We felt that the Alec Tzannes range did that in a very elegant, subtle way.'' Mr Tzannes, who led the design team, said the ''more relaxed and casual'' suite - which was unlike the imperial street furniture of London or art deco designs of New York - was intended to resonate with Sydney.

Light and geometry were used to make bins feel ''elegant and small'', said Mr Tzannes, who spent the most time working on the classic design problem of the chair.

''Chairs are always hard; bins are a little bit easier,'' he said.