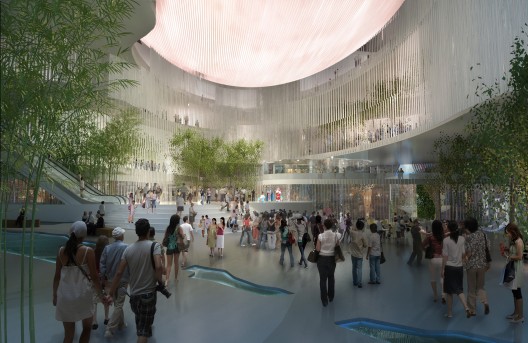 Ronald Lu & Partners - BE alumnus Ronald Lu (BArch 1970, HonDSc 1999) is Chairman - and Bing Thom Architects are the winners of the competition to design the Xiqu Center in Hong Kong, the first of 17 core arts and cultural venues to be opened at the West Kowloon Cultural District.

Both architecture firms have significant experience designing Chinese cultural centers, and won with a design that embraces traditional Chinese motifs. As the District’s first landmark building, the Xiqu Center, scheduled for commissioning in 2016, will also be the “gateway of access” to the district.

Mrs Carrie Lam, Chairman of the West Kowloon Cultural District Authority (WKCDA) Board, noted that the Center’s unique positioning (“Occupying a prime site of 13,800 square metres at the eastern edge of the District on the corner of Canton Road and Austin Road West”) “will enable multi-disciplinary dialogue and interaction between Xiqu and other performing arts. By building this cultural hub, we are investing both in our future and our heritage, to celebrate Hong Kong’s unique cultural identity.”

According to the WKCDA, the winning design was chosen unanimously for embodying the “essence of Xiqu” (Chinese Opera). The design was also praised for its sustainability and unique structural design (which allows the building to be constructed from the top and bottom at the same time, ensuring an efficient speed of construction).

Congratulations to Dr Ronald Lu and his team for their great success!