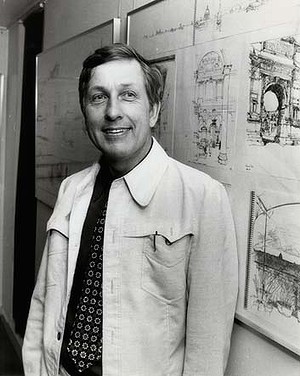 John Christopher Haskell was born on September 18, 1931 in Guildford, England, one of twin boys to Reginald and Gladys Haskell. Both boys became architects.

John went to Guildford Grammar school then studied architecture at the Kingston-on-Thames College of Art, graduating in 1952. He won the prestigious Rome Scholarship in Architecture and was a resident at the British School at Rome in 1955 and 1956, and again from 1958 to 1960.

He was always passionately interested in music and he was playing the organ at the British School when he met Janetta Adler, a young South African opera singer. They were married in 1962. He was also a conscientious objector from a young age and hated jingoism and war. He and Janetta were married by the Quakers, although they later converted to Catholicism.

From 1960 to 1966 Haskell was an architect and planning consultant to the Oxford Preservation Trust in Britain, and in 1961 he won a Ford International Fellowship and Fulbright scholarship to the Massachusetts Institute of Technology.

He was also invited by the architect William Holford to join his firm and worked there from 1961 to 1969, focusing on urban design. Among the projects in which he was involved was the redesign of 13 square kilometres in the centre of Durban, South Africa.

He was then called to Australia as first assistant commissioner (architecture) for the National Capital Development Commission in Canberra, a position he held from 1972 to 1975. During his time in Canberra, he was involved in the completion of the High Court and National Gallery, and the design and siting parameters of the new and permanent Parliament House.

In 1975, Haskell was appointed Professor of Architecture at the University of NSW and became Head of the Graduate School of the Built Environment in 1981.

He retired in 1993, but had already become active in several other areas, including as an expert witness on urban design and architecture at the Land and Environment Court in NSW, author of several books and occasional lecturer on educational cruises, renowned for his knowledge of architecture, urban design, and archaeology at sites in Italy, Turkey, Greece, Israel, Egypt and North Africa.

He was also, from 1980 to 1993, architectural writer for the Herald, covering such subjects as the history of the public square, the ruin of streetscapes by pedestrian bridges, whether Parramatta Road should be treated as ''heritage'' and the architecture of universities.

Haskell was also a gifted illustrator and his sketches are a legacy of the environment he so much treasured. Many of his drawings were published in Haskell's Sydney (1983) and, with John Callanan, Sydney Architecture (1997).

Haskell strove to increase awareness of the built environment and the forces that created it. In the introduction to Sydney Architecture he wrote: ''Architecture is endlessly fascinating; it embraces theory and practice, the material and the immaterial, imagination and intellect.'' This applies with equal measure to the man himself. He maintained an almost childlike innocence and openness to people till his death.

For more than two decades Haskell looked after Janetta, who is disabled. In 2002, she published her autobiography, A Voice of My Own.

John Haskell is survived by Janetta and children Max, Yasmin and Thu-Lan.