UNSW computing students who developed an app to empower local food charities have placed third in an international competition coordinated by Microsoft. 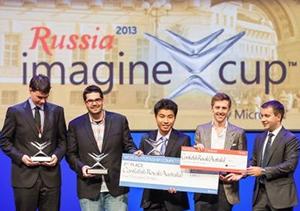 A team of UNSW computing students who developed an innovative app to connect food charities with local food suppliers have placed third in the Microsoft Imagine Cup, an international competition that asks students to solve real-world problems with technology.

‘Team Confufish Royale’ last week travelled to St Petersburg in Russia for the finals and placed third in the World Citizenship category, winning $5,000. The team won the Australian finals of the competition in April this year.

UNSW’s Brad Lorge, Matthew Moss and Kenneth Wong – all from the School of Computer Science and Engineering – teamed up with digital media student Nick Darvey from the Queensland University of Technology, to create Foodbank Local – a system that connects supermarkets and smaller food vendors with charities.

“We have enough food in the world – more than enough. The problem is how to get it to where it’s needed,” says Lorge.

The team’s app allows charities to go ‘online shopping’ to view available food and where it’s located, while suppliers can input available stock into the system.

The app also allows for real-time tracking of deliveries and individuals can view which nearby charities need assistance.

“Foodbank Local works as a food management system as well as a logistics system, as it aims to cut out unnecessary travel and storage time that current distributors experience,” says Lorge. “It’s setting a new paradigm for food distribution.”

“The trial made this project personal. Businesses let us work side by side with them to help get food to the hungry. Over two tonnes of food was delivered – and much of this was fresh food, which would never have made it before.

“The project has shifted how we think about the world and its biggest problems. With a good idea and a few computers, it really is possible to make a difference,” says Lorge.

Microsoft corporate vice-president Steve Guggenheimer said: “The students participating in this competition demonstrate the very best in innovation from their home countries and together are creating new apps, innovations and services that will change the way the world works, interacts and learns.”

The Microsoft Imagine Cup is the world’s premier competition for student developers to create innovative projects and network with industry leaders. A total of 87 student teams from 71 countries participated in the competition.