UNSW will host a public memorial service for energy pioneer and philanthropist Sir William Tyree in the Tyree Energy Technologies Building on 18 November. 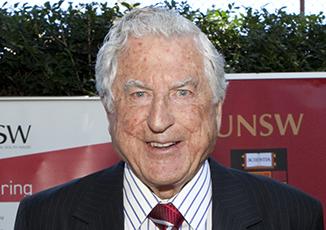 Some people find their vocation early in life and Sir William Tyree, engineer, visionary and philanthropist, was one of them.

At age eight, young Bill made his mother Peggy an electric toaster out of a kerosene tin. Keen to develop Bill’s obvious talent, Peggy Tyree moved the family from New Zealand to Australia to give him the opportunity to study electrical engineering. So at 16, and living at Bondi, Bill enrolled in a diploma at Sydney Technical College, UNSW’s forerunner.

In 1947, after completing his diploma, Bill borrowed funds and with the help of his wife Joyce, set up a small electrical engineering business in makeshift rented premises in Camperdown. From those modest beginnings, Tyree Holdings grew to become one of the largest electrical transformer manufacturers in the Southern Hemisphere. He sold the company in 1969 to Westinghouse, but remained at the helm for another 10 years.

Joyce Tyree once said, “Bill has always been a thinker”. He was also a philanthropist who understood the importance of education. In the 1970s, Sir William established the A.W. Tyree Foundation through which he donated funds to universities, including UNSW, for scholarships to advance engineering and education, focusing on the growing needs of the power industry. The Foundation continues its work to this day.

Sir William’s philanthropy is no more evident at UNSW than in one of our most significant buildings: the Tyree Energy Technologies Building. His contributions helped UNSW build the state-of-the-art building, which was completed last year and is now home to groundbreaking energy research.

“Bill Tyree was one of the real pioneers of Australian industry – a great pacesetter. I think Bill will be most remembered for opening up new vistas for us in energy and engineering, and doing it in such a way that he developed many warm friendships and strong personal associations,” says Professor Hilmer.

“I spent quite a bit of time with Bill in his last few weeks and right at the last visit he was still talking about development projects and national priorities, and how we needed to get nuclear going if we were ever going to become less dependent on coal.”

Sir William recently provided more than half a million dollars to the Faculty of Engineering towards the establishment of Australia’s only graduate program in Nuclear Engineering, co-funded with ANSTO.

Professor Hilmer said Bill and UNSW were a good match.

“We’re a no nonsense university and he was a no nonsense man. He was quick to say that something didn’t make any sense and he loved to throw ideas around. So I think he felt very comfortable here and particularly in the engineering faculty. To him, our leadership in solar energy, also the work we’re doing in power systems and smart grids, were the right issues to be working on.”

“Bill has given me great support all the way through and I’m indebted to him personally. It has been wonderful to know him.

“He had a real passion for engineering and a drive to get things done. As well as his support for philanthropy he was a huge ideas person and I’d often get emails from him about new proposals. He did it all with great warmth and humour.”

Professor Davies says he will never forget Bill’s reaction when he first took him through the completed Tyree Energy Technologies Building.

“It absolutely blew his mind. He looked inside and said ‘I didn’t think it was going to be this big or this good’.”

In Sir William’s own words, his commitment to education was simply an investment in Australia’s future. “I want to try and improve the education of the people coming on to replace us old blokes because unless that happens, Australia will simply not achieve what it should,” he said.

UNSW’s Vice-President, Advancement, Ms Jennie Lang, says Sir William will “always have a special place in our hearts at UNSW”.

“He was in a class of his own. His generous donations and goodwill and loyalty towards UNSW will always be remembered with gratitude. Those who have had the privilege of knowing Sir William have great fondness and affection for him. He leaves an enormous legacy in the form of scholarships and the cutting-edge Tyree Energy Technologies Building.”

Sir William was also a pioneer in breast cancer screening and he combined his engineering expertise with medicine to support breakthrough research into cochlear implants to treat deafness and the development of the bionic ear.

Married to Joyce for more than 60 years until she passed away in 2006, Sir William always said that her support was the vital foundation on which he built his career.

“We have lost a visionary engineer and technology pioneer with a very big heart,” says Ms Lang.

Sir William Tyree passed away on 25 October, aged 92. He is survived by his three children Christopher, Peter and Robyn.

UNSW will host a public memorial service in the Tyree Energy Technologies Building on Monday 18 November from 4-6pm. All welcome.

Some of the information in this tribute was sourced from the book ‘Tyree The Will To Achieve’ by Harold Abrahams. 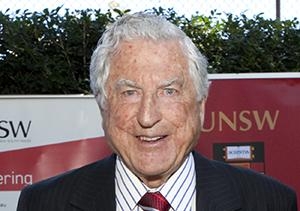 "Bill Tyree was one of the real pioneers of Australian industry – a great pacesetter." Fred Hilmer