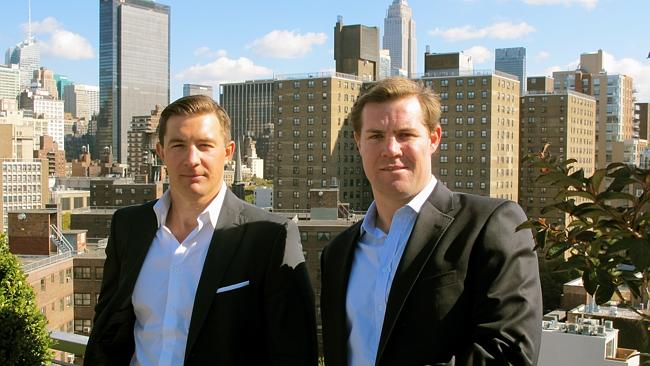 Two Australian country boys are establishing themselves as the Crocodile Dundees of the Big Apple's building boom, securing star clients such as Alicia Keys and James Franco and even being featured on Donald Trump's Celebrity Apprentice. Story by Mathew Murphy, Courier Mail.

Mitch Kidd and Scott Lumby, both 30 and both from regional NSW, are putting the burgeoning success of their Wellbuilt Company down to an old fashioned Aussie work ethic - and the impact of their Ocker accent.

"When Americans hire construction workers here they kind of expect a guy with the builder's crack showing up and not to see people in shirts and ties," Kidd said.

"I think 90 per cent of Americans have had a pleasant experience with an Aussie at some point. I think the accent brings back fond memories for a lot of people.

"We have built this reputation of being able to have a good time while working hard and being professional. Plus, you can always break the tension with a 'mate' or 'she'll be right'."

A genuine Australian success story, Kidd co-founded Wellbuilt Company in 2009 and Lumby came on board this year.

"This place definitely isn't like Australia where you roll up in your ute with your dog in the back and park half way across the footpath," says former Orange resident Kidd.

"I can't even imagine the amount of strife you'd get in if you did something like that in New York City."

The pair first met in their last year of high school playing Australian Schoolboys Rugby and were soon thrown together again after winning identical scholarships to study building construction management at the University of NSW.

While completing their degrees, both gained experience at construction and development firm St Hilliers before quitting in 2006 to embark on a "road trip of a lifetime" across North and Central America.

"We purchased a pretty beat-up jeep for $1000, and drove it from New York to Canada, down through the US Midwest, and continued down through Central America, to the car's ultimate final resting place in Panama City," Dubbo-born Lumby said. "When you go through 10 months of being in very close proximity to one person, day in day out, you really get to know how each other think, act and react in different situations. I guess it's what has helped cement our relationship as business partners."

Once the road trip was over, Lumby took up a construction position in Aspen, Colorado in 2007. Kidd joined him just over a year later but the crippling economic recession meant that he was soon let go.

"After that happened I thought, well, if I can't get a job maybe I can create my own. There were still signs of an economy in New York so I moved here," he said.

The first year he admits was tough at times. Kidd even found himself bunking down at one of his construction jobs at the Gramercy Park Apartments

But with Lumby soon back by his side, the formidable pair set about establishing a name for themselves through Wellbuilt Company, in New York.

"I remember my folks never thought I would move to Sydney so they laugh when they think about me living in a city the size of New York and doing all the things that we are doing," Kidd said.

In Wellbuilt Company's first year the business managed to secure a lucrative contract to completely renovate the 29th floor of Ritz Carlton in Manhattan - a job that was secured for them through a friend and one that helped establish a lot of respect for the firm in the city. It also helped to launch the company's satellite offices in Boston and Connecticut.

Kidd says the Australian accent and work ethic has given them an edge when competing against local companies.

Lumby says one trap Australians can fall into in the US is not self-promoting enough.

"This place is a working city, it is a networking city and a lot about who you know," he said. "Australians don't like to put themselves out there as much as Americans but you have to do that here to survive. If you don't hand out 10 business cards at a meeting you won't get called."

One of the reasons that Wellbuilt Company has been profitable since day one is that Kidd and Lumby have very few overhead costs. The office ... the boys have taken New York by storm. Source: News Limited

"Our office is basically a cloud in the sky which saves a lot of money. We are also a green company as well which cuts down on costs," Kidd said. "We were really forced to be creative when we started in the recession but it has meant that having got through this way we are now in a better position."

At any one time Wellbuilt Company has about 15 jobs on the go across their three locations and have 10 full-time staff and up to 40 subcontractors. The average cost of the jobs they work on range from between $US500,000 to $US1.5 million.

"We have done our fair share of walk-in wardrobes that resemble something out of Sex and the City," Kidd says.

The boys say that their one piece of advice to other Australians thinking of making a similar leap into the US market is simply to deliver on your promises.

"You really have to do what you say you are going to do and if you don't deliver then don't make excuses," Lumby said.

Lumby and Kidd expect that New York will be their home for now but don't be surprised to see Wellbuilt Company returning to the Australian market in the future.