We shall not be moved 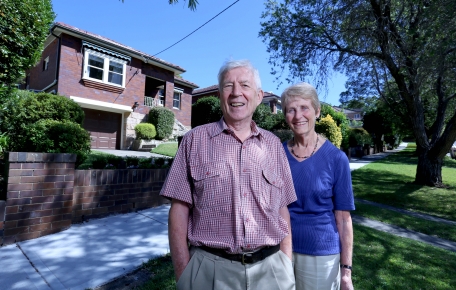 Planning policy relies on older people moving to smaller dwellings. But, as Susi Hamilton reports, downsizing is having little attraction for retirees.
It might look like an unassuming bungalow from the street, but John and Sandra Koolhaas’ home has three spare bedrooms, a large entertainment area, a deck and garden: a house seemingly more suitable for a growing family than a retired couple.
“I always said I would move by the time I was 70, but that’s long gone. As long as I can do the garden and maintain the place, we’ll stay,” says John of the Lane Cove house they have owned since 1970.
While he admits the extra space is “a waste”, there is no incentive to move.
“We thought about downsizing, but I don’t want to live in a unit,” he says.
“At our age, why would you move into a unit when in a few years you’ll just have to move into a retirement home?”
It’s a common sentiment among older Australians. Not even one in 10 people aged 50 or over moved to a smaller home during the five-year period 2006–2011, according to studies from UNSW’s City Futures Research Centre (CFRC) in the Faculty of Built Environment.
It’s a startling finding given much urban-planning policy is premised on the assumption an ageing population needs smaller dwellings.
The centre has identified the key barriers to downsizing: availability of dwellings in suitable locations, financial disincentives and the psychological and practical challenges of moving.
“We could do so much more for older people, and help younger families at the same time,” says the CFRC’s Professor Catherine Bridge, referring to the knock-on effects experienced by younger Australians when their older counterparts stay put.
“When we help people to retire, we give financial advice, but it doesn’t include advice about the house, which is their largest asset,” Bridge says.
Until recently, capital from the sale of the family home could affect pension eligibility, but the federal government went some way to circumventing this by quarantining $200,000 from the assets test to encourage moving and downsizing.
But the report found the majority of older people who do downsize do so for lifestyle reasons, often because they can no longer maintain the house or garden.
“What generally triggers people to think about downsizing is adverse life events, what we call the four ‘ds’: death, divorce, disability, debt,” Bridge says.
“We’re finding the people who choose to move before an adverse life event are much happier with the move.”
The report, funded by the Australian Housing and Urban Research Institute, found those who do downsize are more likely to be older, single females of lower income and resident for fewer years in their current dwelling. One in five moved into retirement-village accommodation.
One of the solutions to the issue is more innovation from developers. The CFRC’s Professor Bruce Judd says there’s an undersupply of the right type of smaller accommodation in the right location.
Units are often presumed to be the best option. However, “people want an accessible home on one level, a small, manageable garden and plenty of living space, but these features are scarce in many new housing developments”, he says.
Strata, too, can be a barrier. “If you are on a fixed, low income, then a rise in levies can be a big problem in later life,” Judd says.
And most importantly, people don’t want to change suburbs; they want to preserve familiar patterns of visiting the same doctor, chemist, friends and family.
That’s something that resonates with Sandra Koolhaas. “We have been very happy here,” she says of her four-bedroom home. “We’re close to the shops, we’re close to the kids. I don’t think any of the new units would suit us: we want to potter in the garden. I think we’d feel hemmed in.”