Searching underwater for MH370 is a shot in the dark

Finding the missing Malaysian Airline "black box" on the bottom of the ocean in an area roughly the size of Tasmania will be an extremely challenging task, warns Robin Robertson. 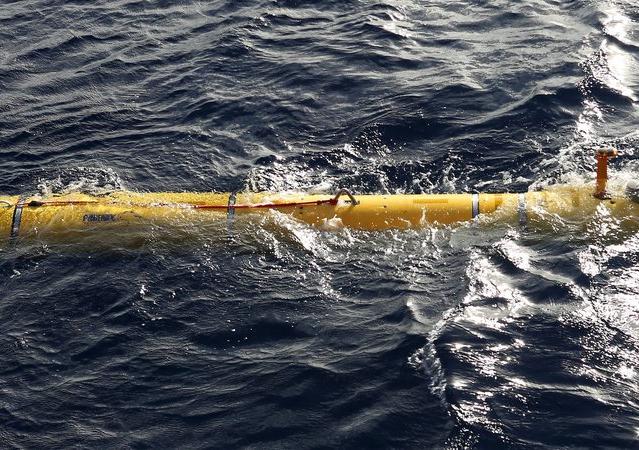 The ongoing search for missing flight MH370 has shown how finding objects such as debris on the ocean is difficult, but finding them underwater in the deep ocean is much more challenging.

As of Tuesday, the search for the Malaysian Airlines Boeing 777 went underwater with the Bluefin-21 autonomous unmanned vehicle put into action.

Already there have been problems on both days of operation, with the vehicle reaching its maximum operating depth of 4,500m.

What data the search authorities were able to download from the vehicle’s first mission – which lasted only six hours – has been analysed and “no objects of interest” have been found. A visual search was then planned for the area 2,087km north west of Perth.

If and when the search underwater resumes there are a number of challenges. Since light only penetrates to about 200m deep even in the clearest water, light is not so useful for searching in the ocean.

In the area of the Indian Ocean where search authorities think the flight might have crashed, the water is more than 4,000m deep. There is no light down at the bottom there, it is pitch dark.

To locate sub-surface objects in the ocean, such as the underwater location beacon “pingers” attached to the black boxes of MH370, various sonars (SOund Navigation And Ranging) are used.

(Sonars can be used by submarines to detect objects that they might run into, although for stealth reasons they often choose to run silent.)

Multi-beam and side-scan sonars determine the depth of the ocean and the thickness of different types of sediment (such as mud or sand) and have located shipwrecks in the past.

But the depth of the ocean is not well known. We know the Moon and Mars better than we know the ocean floor.

In 2005, the USS San Francisco collided with an seamount (mountain in the ocean) in the Pacific, near Guam. The seamount was not on any navigational charts at the time.

Scientists have mapped the depth of the sea floor using multi-beam or swath sonar systems but these systems only cover a band underneath the ship and a little to either side.

This works well in regions where there are lots of ship traffic, but not so well if ship traffic is sparse. The area where MH370 may have gone down in the Indian Ocean doesn’t see a lot of ship traffic, so it falls into the category of a not well known area.

Basically, this means those coordinating the search on board the ADV Ocean Shield, which deploys the Bluefin-21, use a map, which has guessed between the few known spots. Often maps don’t indicate where it is a guess or where it is known.

So the ocean turned out to be deeper than they expected. They discontinued using the autonomous vehicle, since it needs to be within 30m of the ocean bottom to work properly – and that now appears to be beyond its depth range.

The pressure at such depths is simply too much for the equipment to take. Pressure increases by about 1 atmosphere of pressure for every 10m descent. One atmosphere is about 1kg per square centimetre or 14.7lb per square inch.

At 4,500m there would be 450 more atmospheres of pressure. That’s equivalent to about 465kg of pressure per square centimetre – which is a lot of pressure.

When engineers build any underwater instrument the electronics must be kept dry, so they are enclosed in a case that can withstand considerable pressure. The walls have to be thick or made of strong material (that doesn’t corrode in seawater) and the seals must be tight. For the deep depths and high pressures, that’s expensive and there are limits.

No straight line in search

It’s estimated the search area as roughly 75,000 square kilometres, slightly larger than Tasmania. Any sonar equipment looking for the pinger or aircraft wreckage is being dragged on the equivalent of a sled behind the ship on a long cable.

It will not follow the ship exactly, but will wiggle back and forth. Think of a car pulling a sled on a long rope. You would want to have a really wide road, because the sled will be swinging back and forth even without wind. Currents are the equivalent of wind and with currents, it will be swinging even more.

So the search vessel could drive the same path on the surface and the sonar sled cover a different path each time.

The batteries in a black box recorder beacon are supposed to last a minimum of 30 days and flight MH370 disappeared on Saturday, March 8 – 40 days ago.

So if the batteries are now dead and the pingers silent, side-scan type sonars (on devices such as the Bluefin-21) must be used to find the plane’s wreckage. The actual black boxes are too small to find.

The search is further complicated by the amount of other debris floating or sunk to the ocean bottom.

My research team once towed an instrument off NSW at at depth of 200m behind a research vessel, when the tension on the wire peaked and then dropped.

Although we don’t know for sure what happened, the rust on the cable indicated that it had probably rubbed against an unknown rusty object, which we speculated was a ghost container – a shipping container that had fallen off a ship and partially sunk. Ghost containers don’t always float at the surface or settle to the bottom either, often they just hang around in the middle depths.

There are quite a few of these ghost containers in the ocean, but no one knows where, because the currents move them around.

So basically, finding an object on the bottom of the ocean is very difficult and finding the MH370 black boxes is a extremely, challenging task. I hope they are successful in their search.

This opinion piece first appeared in The Conversation.