Are we heading for a worrying Super El Nino? 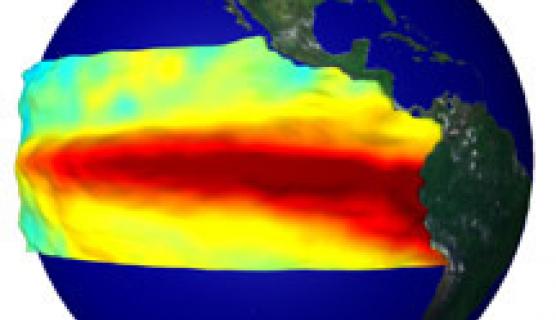 This story first appeared in The Conversation.
by Agus Santoso and Shayne Mcgregor

We have only just moved into May and despite being seven months away from next summer in the southern hemisphere, climate researchers are seeing the beginnings of what could be the most powerful El Niño event since 1997/98.

An El Niño is a change in Pacific Ocean and atmosphere that typically causes drought, extreme heat and bushfires in Australia.

Last year was a neutral El Niño and we have been surprisingly lucky with only a few small El Niño’s since the 21st century started, despite having two of the hottest years on record globally in 2005 and 2010.

The last really big El Niño was in 1997/98. It is no coincidence that 1998 is the only remaining year from the past century that still sits in the top 10 for the hottest years, globally, on record.

By itself, research shows an El Niño event can raise the global average temperature for the following year by 0.1 to 0.2C. It is one of the reasons many climate scientists have been concerned about what could happen if another strong El Niño was to occur.

The way things are shaping up in 2014 we may be about to find out.

Strong El Niño on the cards

Over the past month and a half, three strong westerly wind blasts along the equator appear to have triggered ocean subsurface warming. The warming has intensified and rolled to the eastern equatorial Pacific — a strong sign of a developing El Niño.

Click this image to see a rotating gif showing the development of an El Nino in April this year. Picture: NOAA

But it is not the ocean warming by itself that is significant, it is also the amount of water involved. Even at this early stage the equatorial Pacific is storing the largest amount of warm water since 1997/98.

From these observations, it appears that a very strong El Niño may be initiated. Forecasters suggest the probability of an El Niño is now above 70%, which is a remarkable estimate considering the time of year.

Predicting an El Niño during the March-May period is difficult and it says something for both the improvements in forecasting and, perhaps more importantly, the likely size of this event that an El Niño is being forecast so early in the season.

The key identifying features of an El Niño event are warmer than normal sea surface temperatures in the eastern Pacific and cooler than normal in the Western Pacific. The probability of this feature developing over the course of a year depends on many factors.

For this reason, as with much of science, probability plays a very big part in forecasting El Niño development. Only as we move closer to summer when researchers are able to tick off each development stage of the event do these probabilities move towards certainty.

But,as was found in 2012, even very close to summer nothing is certain. In that year, researchers were prepared for a mild El Niño when suddenly in October it completely dissipated, returning the Pacific to neutral conditions.

Normally, a developing El Niño passes through a number of fairly common stages.

There are good reasons why it is rare for an El Niño forecast to be made in the March-May period – what researchers refer to as the Autumn Predictability Barrier. This is because at this time of year ocean circulation changes are generally small and the surface wind response to these changes is often weak.

With such a small response during this time of year, sea surface temperatures are not very useful for predicting El Niño beyond autumn.

But more recently, thanks to improved ocean observation systems, researchers have been able to start penetrating this autumn barrier by looking at subsurface water below 50m and above 300m.

This deeper water is less susceptible to atmospheric noise so as it starts to shift to the East Pacific scientists expect it may be a signal that an El Niño will form. The record of these deeper observations is still relatively short and it will require many years before scientists can confirm whether this helps remove the autumn barrier.

To trigger an El Niño requires significant warming of the ocean and a number of very strong wind blasts from west to east off the coast of Papua New Guinea. These blasts push the warm ocean waters to the eastern Pacific off South America and set up El Niño conditions.

This year has already seen three such powerful wind blasts. The most recent directly led to the tropical low that generated severe flooding in the Solomon Islands and later developed into Category 5 Tropical Cyclone Ita.

It is only when the wind blasts pick up across the equator in winter, when the ocean and atmosphere interaction becomes stronger, that forecasters can get a better estimate of the likely strength of the El Niño by monitoring two key indicators.

The first is the temperature difference between water in the eastern Pacific and the western Pacific. The smaller the difference, the more likely it will be a strong El Niño event.

The second is the volume of warm water across the equatorial Pacific Ocean – the greater the volume, the stronger the event.

These indicators usually appear six months before the event which is why the winter period is important for forecasting an El Niño. But as we have seen, the amount of warm water is already large this autumn – the largest since the 1997/98 Super El Niño event.

Recent research found that the Super El Niño events of 1982 and 1997 had a very distinct characteristic that didn’t appear until spring.

This causes much higher sea surface temperatures over a much larger area, which in turn has powerful effects on the location of rainfall and weather systems.

The research also showed that these unusual El Niño occurrences would double in frequency with global warming and new research is pointing to how El Niño events may change in the future.

What the future brings

How El Niño and La Niña events will develop over time with global warming has been an important research question. Will there be more or less of these events? Will those events be stronger or weaker?

Research published in Climate of the Past in October last year found that the El Niño Southern Oscillation has been more active between 1979-2009 than in any other period during the past 600 years.

Another study published in Nature Climate Change suggested that more frequent extreme El Niño events are to be expected under greenhouse warming.

And as we have already noted, those Super El Niño-like events are expected to double in number as the world warms.

It is fortunate that our ability to forecast these events is improving at the same time.