Opinion: Newcastle development a warning we are on the road back to Askin-land 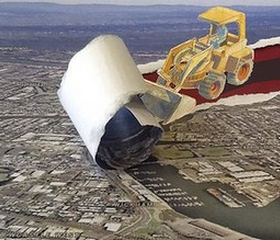 In a context of covert developer donations, paid ministerial access and overtly developer-led planning, the Chinese-language brochure that offers our treasures for sale paints NSW as little more than a government cash cow.

In Newcastle this message is, if anything, clearer. There, the government's own UrbanGrowth, conjointly with Singapore-controlled developer GPT, proposes a massive new downtown development. The proposal, flanking the Hunter Street mall, is a weird mix of quasi-officialdom and outright gluttony. Almost tripling existing height limits, but only on its own site, this proposal is a case study in just how destructive it is when governments leap the fence.

True, Newcastle desperately needs renewal. It needs bustle. Yet the GPT proposal will not deliver this. As every study shows, urban vitality depends far more on quality than quantity. This development, by contrast, is so quantity obsessed it has trashed every other consideration – equity, process, heritage, scale, topography, urban form and transport. It also sets a precedent for developer-led planning that is dangerous even by Sydney standards.

If it is approved – and there's every expectation that it will be, since UrbanGrowth is explicitly tasked to ''obtain rezoning and development approvals'' – the Newcastle process will be a model for even more massive developments in Sydney. An obvious instance is the Barangaroo-dwarfing proposal, instigated by the Chinese government's Greenland developments, to build over Central Station.

I'm not anti urban renewal, either in Newcastle or at Sydney Central. Nor am I opposed to Asian investment, even on a massive scale, in such renewal. But the essence of good city-making is an energised tension between developer and government. Push and pull. Desire and control.

The wealth behind these developments is immense: Singapore government, China government. This requires government to be not less controlling, but more. When government and developer take the same end of the rope, it's all over. No tension. No energy. No probity.

This would be sad. Newcastle is a lovely town. The 20th century treated it badly. Poor planning allowed rampant ex-urban mall-sprawl to suck the life from the place. Yet this meant that, rather than being destroyed by motorways and ''comprehensive redevelopment'’, Newcastle was simply vacated. Unlike the GPT proposal, this is reversible.

Newcastle's good bones have been preserved by neglect. Its central, cathedral-topped hill, its long north-facing riverfront, its strong 19th century street-grid, its ornate and muscular heritage and its wild surf beaches pressed up hard against the town: Newcastle has long been a secret waiting to be told.

Now is its moment. For years there have been murmurings. Green shoots. These, like ''reclaim the city'' movements across the world, vibrate with young energy: Marcus Westbury's Renew Newcastle movement, for one, and resident blog-provocateur Matt Endacott.

Newcastle also has a new urban-minded bishop, eager for the cathedral to participate in the city's reawakening. Greg Thompson (formerly of St John's Darlinghurst) imagines a future where the Horbury Hunt-designed cathedral is once again the town's active heart.

Envisioning a low-rise, village-scale, street-active development on the cathedral's hilltop site, the bishop says he is ''excited'' by possibilities of a design excellence competition to transform the introverted cathedral close into a lively city precinct, showcasing its remarkable World War I memorabilia and linking – perhaps even by cable car – to Newcastle's burgeoning tourist trails.

Already, residential redevelopment is proliferating around the city's picturesque east end. So GPT's insistence that its 20-storey towers are needed to ''kick-start'' Newcastle's revitalisation is clearly spurious.

To be effective, such a seed project would be at the unloved, western end of Hunter Street, away from the sea breezes and cafe culture – and away from the valuable heritage buildings. The GPT development really just capitalises on renewal that is emerging naturally.

Newcastle lord mayor, the Liberal-leaning developer Jeff ''Get the Job Done'' McCloy is enthusiastic – so enthusiastic that he contrived to mishear Bishop Greg's ''I’m not opposed to high-rise'' to make him ''a surprise backer of the latest urban renewal plan''.

McCloy, who announced his ''shock'' decision to run for lord mayor from Singapore in July 2012, was recently mentioned at the Independent Commission Against Corruption regarding a donations matter to which counsel assisting Geoffrey Watson, SC, promised to return ''another day''.

But GPT's towers are not just wrongly located, with the tallest matching the height of the cathedral and blocking views from many angles. The spot rezoning that will permit them is wrong in principle, and on so many levels. The process is flawed, the building type inappropriate, the quantum greedy and the politics ugly, at best.

Current controls impose a plot-ratio of 4:1. That's much higher than it sounds (Seidler's Horizon apartments in Darlinghurst being only 3.5:1). Over two hectares, 4:1 gives eight hectares of floor space. In a small town, that's mega. Mayor McCloy says he wants ''full shops''. But towers, far from doing this, will sterilise further growth by grabbing all development potential for 20 years to come.

But two-thirds of the site has mine-subsidence issues, so the ''planning'' process entailed seeing 4:1 as a ''minimum'', concentrating the entire eight hectares into towers almost three times the height that constrains everyone else, then pretending the gap between is about ''view corridors'' to the cathedral.

It's false argument, and false planning. To spot rezone at a developer's behest is seriously bad practice. To do it to the government's own benefit, and with the same minister (Pru Goward) in charge, is thoroughly reprehensible – especially when the promise to end such abject governance (in the form of Part 3A) was key to Barry O'Farrell’s election.

These mistakes are not reversible. They're permanent. Buildings can be demolished but you can never down zone. A tower is forever. Newcastle deserves better. It deserves a government that values quality as much as quantity. It deserves truth.